At the beginning of the month, we blogged about $100-per-day fines the Ports of Los Angeles and Long Beach were to impose on carriers for lingering containers. The carriers immediately said they’d pass the fees off on shippers, of course, so these are more like fees for shippers, who are already paying sky-high freight rates and dealing with costly delays from port congestion.

Today, we share good news. At least for the moment. Those fees are being delayed.

The U.S.’s largest ports of Los Angeles and Long Beach will postpone the start of a fee on ocean carriers that fail to clear containers off the docks, which was set to begin Monday.

The plan to charge carriers $100 per day for each container sitting on the docks for at least three days announced by the twin ports last month was put on hold until Nov. 22, Port of Los Angeles Executive Director Gene Seroka said in a statement.

The Port of Los Angeles’s press release announcing the postponement of these fees includes the subtitle, “Noticeable Progress in Reduction of Import Containers on Terminals.” The implication that improved movement of import shipping containers from the dock resulted in the fee delay is made more explicit in the release, but it also makes it clear that if results don’t continue to meet the ports’ approval, they are ready to implement the fees.

Here’s the full content of the press release from the Port of Los Angeles:

SAN PEDRO, Calif. — Nov. 15, 2021 — The Port of Los Angeles and the Port of Long Beach announced today that they will delay consideration of the “Container Dwell Fee” directed at ocean carriers until Nov. 22.

“There’s been significant improvement in clearing import containers from our docks in recent weeks,” said Port of Los Angeles Executive Director Gene Seroka. “I’m grateful to the many nodes of the supply chain, from shipping lines, marine terminals, trucks and cargo owners, for their increased collaborative efforts. We will continue to closely monitor the data as we approach November 22.”    “We’re encouraged by the progress our supply chain partners have made in helping our terminals shed long-dwelling import containers. Clearly, everyone is working together to speed the movement of cargo and reduce the backlog of ships off the coast as quickly as possible,” said Port of Long Beach Executive Director Mario Cordero. “Postponing consideration of the fee provides more time, while keeping the focus on the results we need.”   Since the fee was announced on Oct. 25, the twin ports have seen a decline of 26% combined in aging cargo on the docks. This encouraging momentum supports a delay in implementation of the fee.

The ports will charge ocean carriers in these two categories $100 per container, increasing in $100 increments per container per day until the container leaves the terminal. 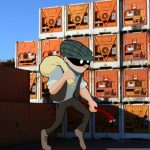 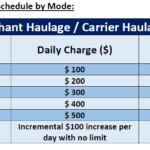