As delegates from almost 200 countries, 195 to be exact, try to work together in Paris to negotiate a global climate agreement, the big news surrounding the latest draft of their global climate deal published by the United Nations is not what’s in it, but what is not in it.

You can read the draft here, but if you do, you will not find a single reference to shipping, whether the maritime or aviation sector.

And that fact is headlining story after story about the attempt of the United Nations’ to reach agreement on what is to be done in regard to global warming.

The 2015 Paris Climate Conference (COP21) has brought the nearly 200 nations together with the purpose “to hold the increase in the global average temperature to below 2°C above pre-industrial levels.”

Or is that really the purpose?

Ideally, the United Nations would like to do even better than that with its Framework Convention on Climate Change that COP21 falls under. Keeping global warming below 2°C is option one of three listed in the purpose section of the Paris agreement draft.

The other options indicate desires to work for even less global warming temperature increase:

Option 2: well below 2°C above pre-industrial levels [and to [rapidly] scale up global efforts to limit temperature increase to below 1.5 °C] [,while recognizing that in some regions and vulnerable ecosystems high risks are projected even for warming above 1.5 °C],

Option 3: below 1.5°C above pre-industrial levels, taking into account the best available science, equity, sustainable development, the need to ensure food security and the availability of means of implementation, by ensuring deep reductions in global greenhouse gas [net] emissions;

Basically, keeping global warming within a 2°C rise must be thought of as the bare minimum goal for the United Nations. That goal, some critics are saying, cannot be achieved if international shipping sectors are ignored in the agreement.

According to Reuters, international shipping, both in terms of aviation and maritime, was addressed in a previous draft, even if only briefly:

A previous U.N. draft, published on Dec. 5 and heavily couched with brackets said: [Parties pursue the limitation or reduction of greenhouse gas emissions from international aviation and marine bunker fuels … a view to agreeing concrete measures addressing these emissions.”

No specific regulations, guidelines, or measures existed in that paragraph, but many felt it added pressure to the international shipping industry to decrease the greenhouse gas, CO2 emissions. The paragraph’s removal has resounded like a call to arms for green groups.

Seas At Risk, an umbrella organization of environmental NGOs, published an article with the headline: Excluding aviation and shipping emissions from COP deal makes 2°C limit close to impossible.

The dropping of international aviation and shipping emissions from the draft Paris climate agreement published this afternoon has fatally undermined the prospects of keeping global warming below 2°C, green NGOs Seas At Risk and Transport & Environment (T&E) have said.

As their emissions uniquely fall outside national reduction targets, they require an explicit reference in the agreement.

If treated as countries, global aviation and shipping would both make the list of top 10 emitters. In recent years their emissions have grown twice as fast as the those of the global economy – an 80% rise in CO2 output from aviation and shipping between 1990 and 2010, versus 40% growth in CO2 emissions from global economic activity – and they are projected to grow by up to 270% in 2050.

The International Chamber of Shipping (ICS) has been toting very different numbers in a fact sheet they published leading up to COP21, pointing out all the effort and success maritime international shipping has had in reducing CO2 emissions.

Here are some of the numbers and CO2 emissions advancements the ICS has been using to paint a very different picture of the maritime industry than that painted by Seas At Risk from our previous blog on ICS’s claim that ocean shipping is part of the solution to climate change:

The ICS fact sheet lists the following achievements that have already been made in CO2 emission reductions when it comes to ocean shipping:

Then the fact sheet shows the advancements that are on the way:

The European Parliament is looking at different numbers and projections than those of ICS.

A press release from the European Parliament includes:

The Paris climate change agreement should not leave out aviation and shipping, two sectors whose emissions are rocketing and, if left unregulated, could account for up to 40% of all global emissions by 2050, (according to a European Parliament study), said the EP delegation on Tuesday.

The Maritime Executive reports that EU Energy and Climate Commissioner Miguel Arias Canete said shipping and aviation not appearing in the most recent global climate deal draft is a “a step backwards.”

Six of the ten international shipping news alerts I received in my inbox yesterday were about shipping and aviation getting away from the climate deal.

It’s amazing how much controversy the removal of one paragraph that doesn’t even say much of anything can have. Especially when there are much bigger issues being grappled over by the United Nations.

Just from the little bit of the purpose section quoted above, it can be seen that there are deeper issues than including the explicit mention of the shipping and aviation industries. Clarity of purpose would be nice. Exactly what are the long term goals of the global climate agreement?

There isn’t agreement on that issue. That’s probably why there are three options leading off the purpose section of the document.

A contentious area of debate is who pays to help countries that are most vulnerable to global warming. Do advanced developing countries like China and oil-rich Arab nations contribute to financial aid being shelled out by countries like the U.S.? The agreement draft doesn’t answer that. Too sensitive.

There are already U.N. agencies responsible for regulating CO2 emissions for the aviation and ocean shipping sectors: the International Civil Aviation Organisation (ICAO) and the International Maritime Organization (IMO), respectively. 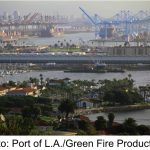