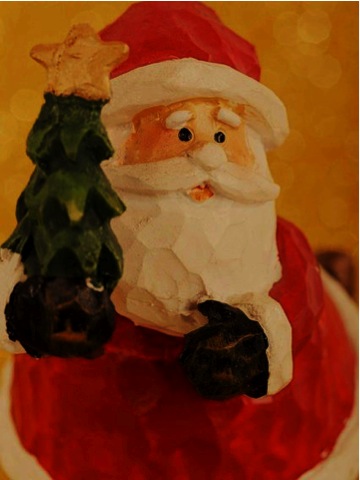 Could your ocean freight cargo be shipped directly across the North Pole?

According to an article in the Proceedings of the National Academy of Sciences of the United States of America (PNAS) by Laurence C. Smith and Scott R. Stephenson, the answer is yes. Yes, your cargo could be shipped directly across the North Pole.

Decreasing ice has caused many to speculate about the possibility of shorter shipping routes through the Arctic Ocean emerging. The Arctic ice extent isn’t low enough yet for a major distance saving route right across the North Pole, but Santa might want to start looking for a new base of operation, as it appears the day is on the way.

According to Smith and Stephenson, by mid-century open-water vessels will be able to complete September trans-Arctic voyages along the Northern Sea Route (NSR) with increased frequency and over a larger geographic area. “Put simply,” Smith and Stephenson say about the years 2040-2059, “by midcentury, September sea ice conditions have changed [they’re speaking in terms of model projections] sufficiently in the NWP [Northwest Passage] such that trans-Arctic shipping to/from North America can commonly capitalize on the ~30% geographic distance savings that this route offers over the NSR.”

30% geographic distance savings? Santa better start packing! At least he has a few decades to prepare for the ships invading his workshop. Of course, the melting ice has his workshop at risk of sinking before the ships show up anyway.

Back to the real world, there are other factors that could impede trans-Arctic shipping through the NWP such as “dearth of services and infrastructure, high insurance and escort fees, unknown competitive response of the Suez and Panama Canals, poor charts, and other socioeconomic considerations” listed by Smith and Stephenson, but “sea ice currently represents the single greatest obstacle to trans-Arctic shipping.”

The maps below from the PNAS article show potential routes for Polar Class 6 and open-water vessels crossing the Arctic Ocean between the North Atlantic (Rotterdam, The Netherlands and St. John’s, Newfoundland) and the Pacific (Bering Strait). 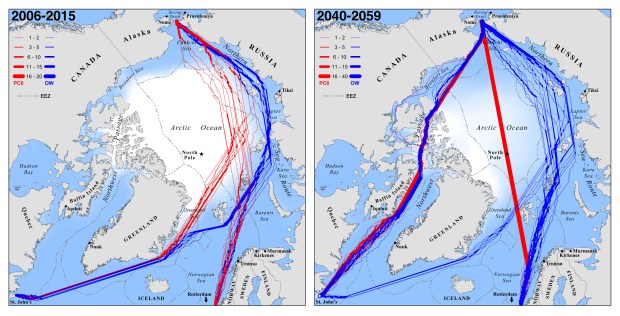 Before we go thanking Global Warming and jump into shipping through that coveted Northwest Passage, there are many issues that arise from the potential of new shipping lanes through the Arctic.

Smith and Stephenson bring up search and rescue. Arctic waters would certainly present dangers to seafarers shipping goods. What search and rescue capabilities could be put together for the event of ships going down in the Arctic?

Smith and Stephenson also bring up heightened urgency this would create for a mandatory International Maritime Organization (IMO) and regulatory framework for environmental protections and vessel safety standards.

Many more questions and issues will arise as the region becomes more traversable. The economic benefits that new Arctic shipping lanes would produce is likely to create political squabbles between nations. What about tourism to the North Pole? People may be willing to pay top dollar to see the fabled home of Santa Claus.

For now, international shipping remains the same. We’re not adding North Pole services to what we do as a freight forwarder, but the day will come when this could have a serious impact on how your cargo is moved.

As always, we’re ready to help you with your importing and exporting needs. Contact us now for free freight rate pricing.