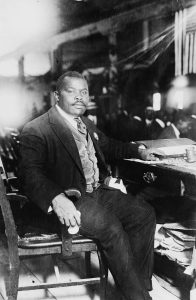 This article was written by Universal Cargo’s own, Alesha Barron.

As a major figure of the Harlem Renaissance, Marcus Garvey was in the vanguard of the new awakening among African Americans. Although his philosophy was at odds with other leading figures of the era, such as W E. B. Du Bois, his influence could not be abated. Promoting his ideals in the art of oratory and through his newspapers, first Negro World and later the Blackman, Garvey has influenced almost every generation of African American writers since. Perhaps the largest endeavor of the UNIVERSAL NEGRO IMPROVEMENT ASSOCIATION (UNIA,) was the Black Star Steamship Line, an enterprise intended to provide a means for African Americans to return to Africa while also enabling black people around the Atlantic to exchange goods and services. The company’s three ships (one called the SS Frederick Douglass) were owned and operated by black people and made travel and trade possible between their United States, Caribbean, Central American, and African stops. The economically independent Black Star Line was a symbol of pride for blacks and seemed to attract more members to the UNIA.   Today, as a result of the strides made by Garvey and UNIA, is that of iconic universal black pride and affirmation.

Garvey was unique in advancing Pan – African philosophy to inspire a mass movement and economic empowerment would later be known as, Garveyism.  He was often heralded as one of the main proponents of Black Nationalism in Jamaica and the US.  After his deportation to Jamaica, Garvey went to create the PPP or People’s Political Party, Jamaica’s first modern political party in 1928. The party focused on workers’ rights, education, and aid to the poor.  The influence of Garvey’s drive reached Africa, Europe, and the Caribbean.  Kwame Nkruma, the Prime Minister of Ghana at that time, named the nation’s first shipping line Black Star Line, in honor of Garvey and the UNIA.