“The port congestion is not getting better but worse,” Daphne Chang, Operations Manager at the Los Angeles office of Universal Cargo Management, wrote as the opener of a company-wide email on Friday, October 3rd. 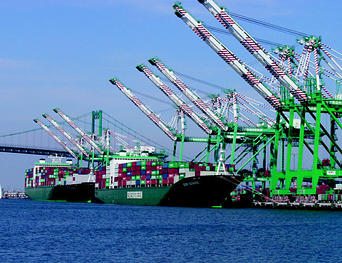 The email went on to outline new fees that Los Angeles/Long Beach truckers are charging because of the huge congestion problems they’re facing at the Ports of Los Angeles and Long Beach.

Supply Chain Management Professional Hugh Finerty shared a memo about the port congestion in his blog which pointed out that drivers at the Los Angeles/Long Beach ports have gone from 3-4 loads per day last year to 1-1.5 loads this year.

Here’s a condensed story from the memo Hugh Finerty shared about one company’s struggle to get a shipping container trucked out of the Port of Long Beach:

“This past week I was involved in a simple move from the Port of Long Beach… The shipment was one container… We have executed this move over 2700 times for this customer… we have used the same drayage company to handle the delivery and without fail it has run flawlessly. Last week, without prior notice that drayage company sent a letter to our customer, the importer of record, informing them they will no longer handle the container drayage for them, effective immediately. We had to scramble to cover 5 loads that week for our customer, we were successful in getting 4 containers delivered. Friday, September 26th the 5th container was still not delivered, and our customer’s customer was threatening to cancel the order.

After going through our roster of drayage companies we could not get one company to go in, on that Friday morning, wait in line, hook up and deliver the container.  Finally at 10:30AM, we found a trucker who would deliver the goods, for a premium…. it would cost the customer $2450 to deliver the container to South El Monte, which is only 29.6 miles from the Port of Long Beach.

… when I read the $2450 cost to deliver the container, I couldn’t believe it! Without going into details, I was able to pull a favor from a drayage company to go in and pick up the container at zero additional cost. In following up on delivery of the container, I reliazed the following:

… If this is the time frame for an expedited pick up, with wheels, what is the turn time for a normal container pick up…. it is averaging 5.5 to 7 hours. That means a driver that goes into the port, will most likely only get one turn for the day, maybe 1.5. A truck needs to make $600/day to cover [its] operating cost, a move to Ontario California costs $395 total. Where is the profit for the drayman? Hence the one and only reason drayage companies are no longer willing to pull containers out of the port.

While there are some drayage or trucking companies refusing to pull shipping containers from the Ports of Los Angeles and Long Beach during this extreme congestion problem, many are still willing to go in and get containers. But like in the story above, there are fees.

Just looking at the numbers in terms of labor percentage and volume growth, it would appear that the union is very unproductive. While August shipping container volume went up 1% at Los Angeles/Long Beach from the previous year, man-hours went up 20%.

Although many feared slowdowns at ports on the West Coast from labor because of contract negotiations, which still drag on long after the ILWU contract has expired, the current slowdown and congestion at the Ports of Los Angeles and Long Beach have deeper roots than labor, despite how those volume and man-hour numbers look.

Here’s an excerpt from a Journal of Commerce article on the congestion:

McKenna put the problems at the ports squarely on the shoulders of the chassis issue. “The root of all evils in the harbor is the chassis shortage,” he said.

The extra moves that longshoremen must make each day to clean up the container backlog are sucking up skilled labor, and terminals are reporting that the PMA has begun to rationalize the dispatching of positions like top handlers and rubber-tired gantry operators. Those positions can not be handled [by] part-time workers, known as casuals.

The chassis problem is right at the top of the list of factors causing the congestion problem that is likely to only get worse before it gets better.

You can read about the 5 factors causing congestion and the Ports of Los Angeles and Long Beach here.