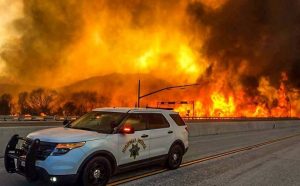 If you haven’t heard yet, the Californian fire season has gotten off to a hot and unfortunate start with what’s been dubbed the Blue Cut Fire.

To get a feel for just how bad this fire is all it takes is one sentence from 89.3 KPCC’s AirTalk article on the Blue Cut Fire:

The Blue Cut Fire surged Monday to over 30,000 acres, chasing more than 80,000 people from their homes in San Bernardino County, all in just over 24 hours.

It just so happens, fire season lines up with peak season for the shipping industry. That means the Blue Cut Fire is not only devastating for those losing their homes, but extremely painful for the country’s largest ports–the Ports of Los Angeles and Long beach–in terms of container volume.

The fire, which is still uncontrolled, has burned cargo routes to and from the Ports of Los Angeles and Long Beach.

Check out this tweet from the County of Los Angeles: 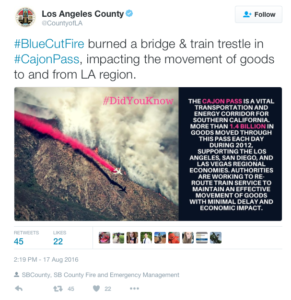 During last year’s peak season, the Ports of Los Angeles and Long Beach suffered big financial damages because of congestion largely aggravated by labor strife during the contentious contract negotiations between the ILWU and PMA. Now, the Ports of Long Beach and Los Angeles are looking at the danger of another peak season of congestion and financial damage.

Of course, the ports are not the only ones who feel these financial impacts. Congestion and disruptions to the supply chain are felt by everyone involved in the shipping industry, including truckers and shippers, and the damage also affects local, state, and even the national economy.

According to an article from the Sun, the Blue Cut Fire, stopping cargo flow through an important shipping corridor, could cost California’s shipping industry millions of dollars a day. Here’s an excerpt from the article that describes how shipping is being impacted:

“This is a huge corridor that is being impacted,” said Eric Sauer, vice president of the California Trucking Association. “It’s going to have a trickle effect from the ports on.”

“It’s too preliminary to quantify the full cost to the trucking industry, but it could cost up to $1 million a day in additional operating costs,” Sauer said.

Interstate 15, the main route between Las Vegas and Southern California, closed down indefinitely around noon Tuesday as flames chased tens of thousands of residents from their homes. The flames forced big-rig truckers to make a tough choice — stop at rest stops and gas stations or divert hundreds of miles east or west.

More than 5,000 cargo trucks use the route daily, carrying everything from fresh produce for supermarket shelves to construction tools en route to Las Vegas and back.

“These are major, major corridors,” said Joe Rajkovacz, a longtime trucker and current spokesman for the Western States Trucking Association. “You are looking at something like a 200-mile diversion for truckers.”

For much of Tuesday and Wednesday, the north-south railroad lines for Union Pacific Railroad and BNSF Railway through the Cajon Pass were shut down, delaying the distribution of millions of dollars’ worth of goods.

This fire could be a major blow for the Ports of Los Angeles and Long Beach, which have been working hard to regain shippers’ trust and market share after the congestion of last year’s peak season.

The ports, along with the other players in the supply chain, have been working hard to avoid major congestion.  So far, it appears they are doing well at keeping the congestion down.

Currently, there is no significant pile up of containers at the terminal, [port spokesman Michael Gold] said, with rail lines working to minimize an overflow. Port officials continue to monitor the fire, looking to rail providers Cal OES for updates on infrastructure damage and repair in the Cajon Pass.

Of course, firefighters are working hard to bring the fire under control. However, this massive fire is a huge challenge that continues to spread. One has to wonder if the ports will be able to keep congestion down as shipping routes continue to be impacted.

For shippers, this spotlights worries of relying on these West Coast ports too heavily during peak season. Diversifying shipments and stocking early for the holiday seasons once again look like good decisions by the many shippers who went that route.