One factor hindering ocean freight international shipping to and from Africa is piracy. Could Ghana’s new president help give African import and export business new life by fighting piracy?

When I was a kid pirates held a certain caché, specifically the caché of swashbuckling rebels refusing to bow to the tyranny of daily life (kind of like Robin Hood). Pirates were “romantic”, though I would not have used that word. I would have said they were “cool” probably. This was because my entire knowledge of them was based on films I had seen.

The bungling, comic Pirates of Penzance sang and danced their way in and out of danger, always taking pity on orphans they encountered. The character of pirate Long John Silver in Disney’s film adaptation of Robert Louis Stevenson’s Treasure Island “arrgh”ed his way into my teacher’s heart. Yes, she showed us the film instead of having us read the book. His Somerset accent was THE pirate accent to end all pirate accents! His seemingly fierce demeanor alternated with his charming mischievousness as he revealed his compassion for young Jim. Goonies’ One-eyed Willy was ruthless too, in his way, but kind to kids. These pirate guys were fun AND cool! (We will just ignore the swarthy semi-racist depiction of pirates in Disney’s Swiss Family Robinson who were much less charming!) 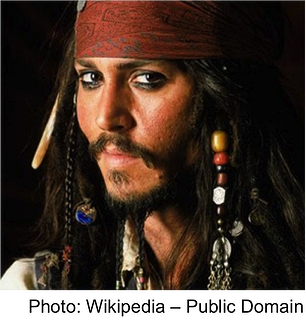 Then, of course, there was the conversion of one of the best rides at Disneyland – Pirates of the Caribbean– into a full-length film starring no less than Johnny Depp as the clever, funny, and lovable Captain Jack Sparrow. Pirates were BACK and they were cooler than ever. So cool that I elected to read and write a research paper about them for a class I took called Terrorism in college. No, I wasn’t learning how to be a terrorist. Yes, that joke got old fast.

In my research, a salacious book about pirate homosexuality caught my attention. Maybe Johnny Depp read the book too and it contributed to the flamboyant flare he gave Captain Jack Sparrow. However, it’s more likely the story that Keith Richards inspired Depp’s portrayal of the character is true. Still, after reading the book piracy wasn’t so romantic, but it was still just as interesting.

The next natural step in looking into piracy was to consider modern piracy, and here the romance gone completely. Pirates were scary, emaciated, desperate men in open boats with automatic weapons mounted to their prows, stealing bulk goods, cargo containers, and holding crews for ransom from hulking ocean freighters. Where were the sails? The gold? The swords? The swashbuckling? Disney promised me swashbuckling!

Modern piracy has no romance for Ghana’s President John Dramani Mahama. He has been working toward finalizing a pact with the leaders of neighboring nations to reduce piracy against international cargo shipping in the Gulf of Guinea, treacherous waters known as a haunt of pirates off the coast of West Africa.

Mahama hopes thus to promote nautical safety and to encourage international export in West Africa.[1] This is a real need, as Africa is the continent least frequented by international shipping companies, with the highest import costs, and lowest freight volume ports[2]. Piracy is one of the contributing factors to this deficit. The discovery of oil deposits offshore[3] have put Ghana on the map as far as import and export oil business goes and it is in the nation’s best interests to suppress piracy in the area.

Mahama was sworn in as president in July after the death of much-loved President Atta Mills. One of the new president’s aims is to improve nautical safety for Ghana and her neighbors in the Gulf of Guinea. This will be accomplished by the use of recently acquired patrol ships and vessel tracking devices. Mahama has generously placed these tools at the disposal not just of his own countrymen, but those of his neighboring nations as well. Such breadth of vision and generosity is impressive in a part of the world where governments are often unstable at best, corrupt and exploitative at worst.

It’s early to have a full impression of new president Mahama, but I am disposed to be impressed at the spirit of co-operation he has promoted thus far along West Africa’s coast. If he continues as he has begun he is likely to increase the stability and prosperity of his nation. With valuable natural resources like oil, and stable leaders, Ghana is poised to expand its role in the international import and export global economy, making Ghana and the West African coast a friendlier place for ocean freight.

Maybe America could take a lesson in international relations from the nation of Ghana and its new president. When was the last time you heard about a politician lending an airplane or warehouse to the Mexican government in an effort to help stop crime?

[1] Myjoyonline.com, Ghana commits to fighting piracy in the Gulf of Guinea, Sept 9, 2012