Is a Breakthrough in ILWU Contract Negotiations Finally Here?!

The breakthrough that shippers, retailers, and the economy has been waiting for in the contract negotiations between the International Longshore & Warehouse Union (ILWU) and the Pacific Maritime Association (PMA) may have just happened.

Report of a Breakthrough 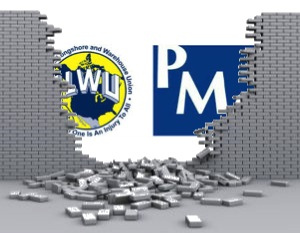 “A long week of bargaining just concluded a little while ago and with some success. This weekend a tentative agreement was reached on the difficult chassis issue. The pace of the dialogue and information exchange picked up speed after the chassis issue [relating to ILWU jurisdiction over chassis repair and maintenance when conducted at locations off the terminals] was concluded. The parties continued to work on the remaining issues with positions exchanged between both parties. PMA and the ILWU will work internally tomorrow morning to prepare for tomorrow afternoon’s bargaining session.

The pace of the negotiations has visibly picked up and the dialogue is more constructive. It seems that both parties are now eager to wrap up these negotiations. Once negotiations are concluded, the parties will have to negotiate the foreman’s supplement as the final part of the negotiation. But it was a productive weekend and there is some light at the end of the tunnel.”

Wrong About Breakthrough Before

Many thought the light at the end of the tunnel could be seen when the PMA announced a tentative agreement between itself and the ILWU regarding health care benefits back in August. Unfortunately, after a long period of silience, things turned ugly between the ILWU and PMA in November.

Before that, all reports were saying the contract negotiations between the ILWU and PMA were going surprisingly smoothly.

Nothing has run smoothly since. West Coast ports have suffered crippling congestion while the PMA and ILWU hurl insults, accusations of slowdowns, walk offs, and shift cuts at each other.

Why should we believe this tentative agreement regarding chassis jurisdiction is really a breakthrough?

Why This is a Real Breakthrough

There are a few reasons to believe this is the breakthrough it’s being reported to be.

The first reason to believe this is a breakthrough in contract negotiations is the importance of the jurisdiction issue to the ILWU. Jurisdiction is always a big issue for the ILWU. The union wants to control as many jobs as possible.

Think of all the slowdowns the ILWU has orchestrated, hard timing the Port of Portland over the jurisdiction of electrical jobs that monitor, plug in, and unplug reefer containers (that’s refrigerated containers, not cargo containers of weed) at the port.

These are not alleged slowdowns at the Port of Portland by the ILWU since judges have ruled the ILWU has purposefully slowed imports and exports there.

When it comes down to it, the ILWU basically does control the jobs on the waterfront. With a strike, the ILWU can shut down West Coast ports and cost the U.S. economy billions of dollars. Anything that can increase or decrease the ILWU’s power is automatically a top issue for the union.

Since ocean carriers released ownership of chassis, jurisdiction to inspect all chassis before they leave the terminals is a huge power piece. Think of how the ILWU can slow down traffic at the ports by randomly inspecting chassis and increasing the scrutiny of chassis inspections.

Truckers have certainly accused the ILWU of using chassis inspections to slow down traffic at the ports before.

It would be unlikely that any unresolved issue would be a bigger roadblock to completing contract negotiations than chassis jurisdiction.

Bill Mongelluzzo of the Journal of Commerce (JOC) reports that PMA spokesman Steve Getzug confirmed on Monday that the tentative agreement on chassis jurisdiction was reached.

Mongelluzzo went on to write, “ILWU spokesman Craig Merrilees said negotiations continued through the weekend and into Monday, and he described the tone of the negotiations as ‘positive.’”

Indeed, industry sources said the ILWU and PMA are now negotiating with an intensity not yet seen since the talks began on May 12, 2014, and both parties appear to want this saga of mutual recrimination and horrendous delays to end as soon as possible.

What Issues Remain for the ILWU Contract Negotiations

Now the PMA and ILWU must resolve the final issues of the contract negotiations to get this deal done and turn their focus back on smoothing operations of West Coast ports and taking care of shippers’ imports and exports where the focus belongs.

Friedmann, quoted above, mentioned the foreman’s supplement as the final part of the negotiation.

The Mongelluzzo JOC article spoken of above says, “The three major remaining issues in the negotiations appear to be wages, pensions and the length of the new contract.”

These issues are not expected to be major problems for the talks; however, it would not be the first expectations that were wrong if wages, pensions, and length of contract become roadblocks.

Still, an optimist might think negotiations could wrap up within the week. What do you think? Share in our comments section below.