Is Port Automation Finally Coming to the U.S.? For years, technology has existed, been implemented around the world, and advanced to make ports more efficient and productive through automation. But that technology has been, for the most part, kept out of U.S. ports.

It looks like that might finally be changing as The Wall Street Journal (WSJ) just reported the following scene:

At one of the busiest shipping terminals in the U.S., more than two dozen giant red robots wheeled cargo containers along the docks on a recent morning, handing the boxes off to another set of androids gliding along long rows of stacked containers before smoothly setting the boxes down in precise spots.

At the Port of Hamburg in Germany or the Port of Rotterdam in the Netherlands, fully automated terminals have hugely boosted productivity for some time.

Meanwhile, U.S. shippers have seen port slowdowns and congestion plague their shipments and cost them international contracts and domestic sales of imported products.

The U.S. is supposed to be a leader, if not THE leader, in technology, so why are we lagging so far behind when it comes to port technology and automation?

It could probably be summed up in one word: unions.

Longshore unions have fought hard to keep automation out of the ports in order to preserve jobs.

This is understandable. One of the benefits of automation for port owners and operators is it decreases the number of workers needed to handle port operations. Over time, that represents a significant cost savings, but that cost is dockworker jobs.

However, the International Longshore & Warehouse Union (ILWU) has not helped the case for sacrificing technological advancement to save jobs at the ports by organizing slowdowns, effectively shutting down the ports, and creating huge congestion problems every time their contract expires.

The U.S. economy has suffered losses in the billions of dollars over labor strife at the ports.

If this is not enough reason for the U.S. to embrace automated operations at the ports, the huge increase of shipping container volumes arriving at a time with the industry’s moves to megaships and carrier alliances is.

Productivity has to be increased to efficiently get all those shipping containers onto trucks and to their shippers. Ports have been struggling with congestion issues, trying to handle the influx cargo volumes. Automated terminals can help alleviate this problem.

That’s why shippers are probably very happy to read as the WSJ article continues, describing how the Port of Long Beach is bringing in automated terminal operations that could spur other ports to do the same:

Supporters of robotic cargo handling are getting a new showcase this month with the phased-in opening of an automated terminal at the Port of Long Beach, next door to the Los Angeles port. At a cost of over $1 billion to complete and the capacity to handle 3.3 million 20-foot container units—nearly half of the entire port’s volume last year—the Orient Overseas (International) Ltd. site is a big bet on the future.

A successful operation in Long Beach could persuade other U.S. ports to follow, said Mark Sisson, a senior port planner with infrastructure-development group Aecom. “The industry at a global level is rushing hard into this technology,” he said. “That trend is only going to go in one direction. It’s just a question of timing.”

The reliability automation can bring to U.S. ports would be a big help in restoring a tarnished reputation that has cost U.S. ports customers and U.S. exporters worldwide contracts.

What do you think? Is it about time the U.S. embraces automated technology at ports? 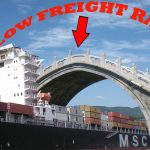