Is Truck Congestion Better at the Ports of Los Angeles & Long Beach?

Congestion at the Ports of Los Angeles and Long Beach hit unbelievable levels during the contract negotiations between the Pacific Maritime Association (PMA) and the International Longshore & Warehouse Union (ILWU) last summer… and fall… and winter. Lines of trucks spilled out of terminals and the twin ports. Trucks waiting for hours to pick up and deliver cargo containers led to fees for shippers, delays in receiving goods, and truckers leaving the business.

At the very least, things couldn’t have gotten any worse, right?

A recent article by Bill Mongelluzzo in the Journal of Commerce (JOC) says that turn times are improving at the Ports of Los Angeles and Long Beach, but have not improved enough for truckers. The real question is whether the time it takes for trucks to get in to terminals, pick up shipping containers, and get out of the port ever will get fast enough.

The decrease in time it takes for trucking transactions to be completed is far from efficient.

The average time to complete a trucking transaction at Los Angeles-Long Beach port complex in July fell by four minutes from the prior month, but no one is celebrating.

Even though the average turn time fell to 89 minutes, down from 93 minutes in June, the Harbor Trucking Association of Southern California says turn times at marine terminals must get back down to 60 minutes if the harbor is to operate efficiently. Shorter truck times aren’t just needed for brisker supply chains, but also to keep drayage drivers serving the largest North American container gateway from parking their rigs and finding jobs elsewhere.

Numbers published by the HTA for July indicate that the 13 container terminals in Los Angeles-Long Beach are recovering from the congestion that has been plaguing the largest U.S. port complex for more than a year now, but truck visits are still much longer than they were in early 2014, when turn times were 60 to 70 minutes.

The way things have been consistently going for the last several months, about an hour and a half seems to be the normal visit time for truckers visiting the Ports of Los Angeles and Long Beach.

“…the average truck visit has been stuck in the range of 93 to 89 minutes the past four months, leading HTA Executive Director Weston LaBar to state that he fears the new normal for the harbor is about 90 minutes,” Mongelluzzo writes.

While that is better than things were at their worst, an hour and half is still not good.

However, there is some good news in the JOC article. Some terminals are operating much more efficiently than this 90-minute “new normal” trucking time would indicate.

Here’s how Mongelluzzo explains it:

The average truck visit times, however, tell only part of the story. Drilling down to each of the individual terminals, it is clear that some terminals are performing very well while others have turn times that greatly exceed the average.

Conversely, the ITS terminal in July had the longest average turn time of 126 minutes, and 45.8 percent of the turn times exceeded two hours.

I suppose if you were a glass half empty type of person you could look at terminals like the ITS one and point out the bad news that there’s a terminal with average truck turn times unacceptably over two hours.

However, being a glass half full type, seeing a terminal where the average is well under the hour standard from before chassis issues, contentious contract negotiations, and other factors led to congestion that cost the Los Angeles and Long Beach market share is great news that truck congestion at the ports can really be solved.

La Bar said that if there is a silver lining in the less-than-acceptable average turn times in the harbor, it is that many retailers and other shippers, anxious to retain truck capacity, have agreed to pay driver waiting time at the terminals.

Shippers agreed to pay driver waiting times. Sure, as if they had any real choice in shelling out cash for these driver waiting or port congestion fees.

The real silver lining is that at many terminals driver waiting time is getting down to acceptable times. 43 minutes is even a pretty good turn time.

Hopefully, shippers will get to stop paying driver waiting time and related fees if the ports can keep working toward higher efficiency. 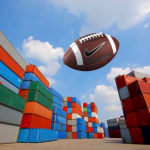