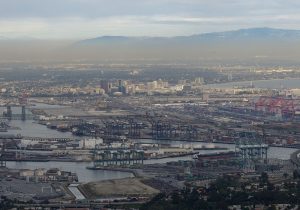 Can the Port of Los Angeles, the continent’s largest port by container volume, completely eliminate its pollution?

Not only is that the goal, but the port is rolling out zero and near-zero emission technologies and strategies in a program “expected to reduce more than 3,200 tons per year of greenhouse gases and nearly 28 tons annually of diesel particulate matter, nitrogen oxides and other harmful emissions from operations at [the port],” according to a Port of L.A. press release.

This is actually incredible news.

Imagine 14,100 cars per day being taken off the road of SoCal’s coast. Yes, that would be nice for those driving through the hell that is Los Angeles traffic, but we’re only concerned with the emissions the cars produce right now. Taking away the pollution of those 14,100 cars is what the South Coast Air Basin’s air gains will equate to with this program, according to the Port of L.A.

I won’t spiral this down into an article on the evils of pollution. We all know pollution is bad for the world and our health. Ports around the world are huge generators of pollution, but the Port of L.A. is leading the way toward changing that with the launch of the new Green Omni Terminal Demonstration Project.

The ramifications using, like this program will use, renewable and clean energy around the world at ports, eliminating the smog and greenhouse gases they currently produce, are huge.

Because so often international shipping news is dominated by negative stories like port congestion and carriers struggling to make a profit and survive, this story is a breath of fresh air. Literally.

The Port of L.A. shares in their press release:

… Pasha Stevedoring and Terminals L.P. and the Port of Los Angeles are launching the Green Omni Terminal Demonstration Project, a full-scale, real-time demonstration of zero and near-zero emission technologies at a working marine terminal.

“This is a Wright Brothers moment,” said Jeffrey Burgin, Senior Vice President of Pasha. “We’re going to be the proving ground to change the paradigm of how large industrial facilities can run on clean energy. We’re confident we can show [eliminating pollution from port-related operations] is absolutely attainable.”

Here’s a list of things the press release says the project will utilize to reach its goals:

Here are the details the press release gives on the project:

Project implementation will start in June with the final design and construction of the solar-powered microgrid. Components include a 1.03 megawatt photovoltaic rooftop array, a 2.6 megawatt-hour battery storage system, “bi-directional” charging equipment that can receive as well as supply power, and an energy management control system.

The project’s developmental fleet of zero-emission cargo handling equipment includes four electrified yard tractors, two high-tonnage forklifts, two drayage trucks and a top handler. Additionally, two wharf cranes will be upgraded with new electrical drives and control systems, and the project will demonstrate ShoreCat, the next generation of the METS-1 (Marine Exhaust Treatment System) for capturing at-berth vessel emissions without plugging into shore power. METS-1, which was piloted at the Port of Los Angeles, is one of only two existing ARB-approved alternatives to shore power.

In addition to integrating zero-emission vehicles and cargo handling equipment into the full scope of terminal operations, the project’s goals are to reduce emissions at berth from non-regulated ships, accelerate the development of commercially viable zero and near-zero emission equipment and solutions.

That cost may slow other ports from following suit right away. However, if the program is as successful as expected, other ports around the world should follow the Port of L.A.’s lead. 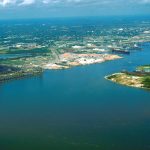