Ports Get Congestion Relief But It May Be Only Momentary

U.S. ports are finally getting a period of time to recover from the unyielding demand and congestion that has plagued them since 2020. However, there are a few things that could make the relief short-lived: potential labor slowdowns from contentious ILWU contract negotiations, easing of Chinese lockdowns, and the impending peak season. On the other hand, skyrocketing inflation could keep demand in check, making the cargo levels moving through the ports manageable. If only inflation wasn’t otherwise so damaging.

Congestion hasn’t completely gone away at U.S. ports. There are terminals, and even ports, that haven’t seen improvement yet, but things have gotten better overall. Greg Miller provided data in an American Shipper article published yesterday on the subject:

There were only 25 container ships waiting to berth in the ports of Los Angeles and Long Beach on Friday, according to data from the Marine Exchange of Southern California. That’s the lowest tally since July 28, 2021. As of Wednesday, there were 28 ships waiting. Current numbers are far below the all-time high of 109 ships waiting on Jan. 9.

In late February, ship-position data from MarineTraffic showed 70 container ships waiting offshore of East and Gulf Coast ports. By mid-May, the count had fallen to 45.

As of Wednesday, it had climbed back up to 58. Traffic jams off Virginia and Charleston, South Carolina, are down. The biggest queues now are off New York/New Jersey — 17 container ships — and Savannah, Georgia, where 25 vessels are waiting. Savannah’s numbers are the main driver of the recent East Coast uptick in recent days; Hapag-Lloyd reported only seven ships at anchor there on Friday.

Fewer Ships… But Why?

While ships waiting at anchor are not the only form or indicator of congestion levels at the ports, the drop in ship queues is significant. Some drop came from blanked (cancelled) sailings of ships from major lockdowns, particularly of Shanghai, in China. Some industry experts worry that with the easing of the outrageous “Covid Zero” lockdowns in China, more shipments – and ships carrying them – will head back to the U.S., causing the queues of ships waiting to dock to increase again.

In fact, Miller points out that a jump in trans-Pacific shipments has just taken place:

Sea-Intelligence said that offered trans-Pacific capacity jumped 21% from 535,200 twenty-foot equivalent units for departures in the week of May 15-21 to 646,500 TEUs this week.

We should see those shipments arrive at U.S. ports in late June. Miller pointed out how last year saw ship queues drop through the third week of June, only to rise again thereafter. It’s possible we could be about to see the same thing here in 2022.

There does tend to be an increase in shipments at the end of June because that’s when peak season really tends to ramp up, with shippers importing goods for the back to school and holiday shopping seasons.

Hopefully, the ports will take advantage of the moment they’re in right now to clear as much congestion as possible before the lifting of Chinese lockdowns and peak season shipping combine to increase cargo movement through them.

There is a great amount of uncertainty in the shipping industry right now as to how well cargo will move this summer. The International Longshore & Warehouse Union (ILWU) and Pacific Maritime Association (PMA) just yesterday resumed negotiations for a new contract for West Coast dockworkers. This is after negotiations were suspended at the ILWU’s behest and the parties’ fight over automation went public in the lead-up to the negotiations.

We’ve been warning in this blog for a long time that negotiations are likely to become contentious over the automation issue. Many shippers have heeded that warning from us and others, moving their cargo ahead of the peak season to avoid any potential disruption that could be caused by labor slowdowns, strikes, or lockouts that could happen as a result of contentious negotiations.

The general level of congestion that has been present at ports has also caused some shippers to try to get ahead and move what would normally be peak-season-shipped goods early.

Early movement of goods and decreased demand because of inflation could make this peak season less strong than it might otherwise be. However, that doesn’t mean there won’t still be a peak season surge, and the 21% increased capacity jump Sea-Intelligence recorded is likely just the start of it.

If things do turn sour in the newly resumed contract negotiations, we could see a triple whammy of that combining with a release of Chinese exports and the peaks season to return port congestion right back to the bottlenecking mess for supply chains we’ve been seeing since the U.S. government locked people down and threw stimulus checks at them, resulting in a goods demand boom that the ports were in no way ready to handle. 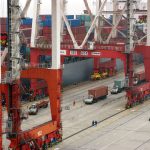