The congestion at West Coast ports is getting better. Slowly. 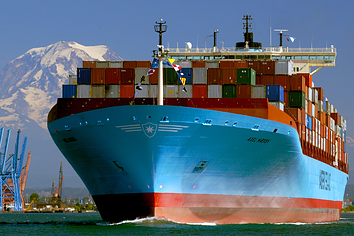 Probably the hardest hit ports by congestion are the Southern Californian Ports of Los Angeles and Long Beach.

Over 40 percent of U.S. imports enter the country through the Ports of Los Angeles and Long Beach, but shippers had trouble receiving their cargo imports because of the congestion caused in large part by bigger ships calling on the ports and chassis being unavailable for the moving of shipping containers.

For more causes of the port congestion, check out our blog: 5 Factors Causing Congestion at the Ports of L.A. and Long Beach.

Not only were imports failing to reach shippers, exports weren’t getting out of the ports either. So U.S. produce rotted on the docks and Christmas inventories didn’t make it to store shelves. And that’s just a small piece of the damage done to businesses and people across the supply chain.

The congestion was made much, much worse by slowdowns during the nine-month-long, contentious contract negotiations between the International Longshore & Warehouse Union (ILWU) and the Pacific Maritime Association (PMA).

On February 20th, a tentative contract agreement was reached between the ILWU and PMA which allowed the ports to focus on fixing the congestion problem.

West Coast ports, and the Ports of Los Angeles and Long Beach in particular, have not yet returned to a “normal” level of cargo flow, but improvements have happened since the tentative labor agreement.

Steve Gorman reported the following in an April 1st article in Reuters:

Nine vessels stood idle outside the twin ports on Tuesday and Wednesday, down from the 31 stacked up at anchor during the height of the cargo crisis that reached the point of near gridlock in February, [Los Angeles port spokesman Paul] Sanfield said.

He said berths were normally available as soon as freighters arrived at the two ports, which together handle 43 percent of all containerized goods entering the United States.

Sanfield said the average time it took cargo ships to get in and out of the terminals declined to 7.6 days last week from 8.4 days in early March. Turnaround times usually average four to five days, he said.

Looking out past the docks and not seeing thirty ships waiting to get in and unloaded is nice. But that there is still a backup of close to ten ships does show that the ports have a decent ways to go in clearing the congestion and getting cargo flowing as it should be for shippers.

Perhaps the best sign that port congestion will be reduced in a meaningful and lasting way, at least in the Southern Californian ports, is that the Ports of Los Angeles and Long Beach are now working together to solve the problem.

The Port of Los Angeles announced in a press release on March 25th that it has started talks with the Port Long Beach to improve cargo flow.

The Federal Maritime Commission (FMC) agreed at the end of February “to allow the two ports to cooperate far more strategically on finding new ways to prevent congestion and cargo delays, improve the transportation network and enhance air quality,” the release says.

Such cooperation without the FMC’s approval might have run afoul of antitrust laws.

The release shares the following optimistic words about the ports’ cooperation:

“Through this working group, we will engage with our stakeholders to discuss issues and develop solutions for optimizing cargo flow through our ports,” said Port of Los Angeles Executive Director Gene Seroka. “Our ports, customers, labor force and supply chain partners are committed to taking this gateway to a new and higher level of performance, and we’ll accomplish this by working together.”

“Our shared goal is to optimize the performance of the trans-Pacific supply chain,” said Port of Long Beach Chief Executive Officer Jon Slangerup. “The San Pedro Bay has always been the fastest route between Asia and the U.S. and I’m confident we will find ways to significantly increase the velocity of goods movement and overall efficiency of our end-to-end system, thereby reinforcing our gateway as the No. 1 choice for shipments to and from Asia.”

For more of what the Ports of Los Angeles and Long Beach are doing to fight congestion and get cargo moving more efficiently, check out our blog: 3 Things Happening to Get Shippers’ Cargo Moving at the LA & LB Ports.

There are still many weeks of recovery ahead to clear the congestion at West Coast ports, but progress is being made.

Many shippers have lost faith in West Coast ports’ ability to provide reliable service and have moved their cargo shipments to other ports where possible.

Longshore delegates are currently meeting in regard to ratifying the tentative agreement. If they decide against the contract, the ILWU and PMA would have to go back to the negotiating table and port congestion progress could halt or even move backwards.

While the union is expected to ratify the contract, there is some opposition within the ILWU: