$450 Billion in Tariffs on Chinese Goods? Is This Getting Out of Hand?

In a statement on Monday, President Donald Trump announced plans to pursue a whopping additional $400 billion worth of tariffs to the $50 billion dollars worth already planned on imports from China if Beijing does not change course on its planned retaliatory tariffs on U.S. exports:

Therefore, today, I directed the United States Trade Representative to identify $200 billion worth of Chinese goods for additional tariffs at a rate of 10 percent.  After the legal process is complete, these tariffs will go into effect if China refuses to change its practices, and also if it insists on going forward with the new tariffs that it has recently announced.  If China increases its tariffs yet again, we will meet that action by pursuing additional tariffs on another $200 billion of goods.  The trade relationship between the United States and China must be much more equitable.

The only thing that has changed with the planned $50 billion of tariff increases on Chinese goods since we blogged at the end of May that President Trump was moving forward with the tariffs and the trade war with China was back on is we’ve gotten closer to the tariffs’ implementation.

Everything is in place for the U.S. to impose the first phase of the tariff increases. On July 6th, $34 billion worth of tariffs on imports from China are scheduled to go into effect. The $16 billion remaining portion of the $50 billion still has to go through a public notice and comment period.

Obviously, China is not happy about seeing these tariffs imposed and is ready to retaliate. Brian Bradley reported in an American Shipper article:

“Though a trade war is not something we want, we are definitely not afraid of one,” a Chinese Foreign Ministry spokesperson said during a Tuesday press conference. “We will continue to take effective measures to firmly safeguard the interests of our nation and our people and resolutely uphold the economic globalization and the multilateral trading system.”

The Trump administration has made similar statements about the U.S. not fearing a trade war. With such stances on both sides, it’s easy to see how tariff threats keep escalating.

These new numbers in President Trump’s statement, adding up to $450 billion, eclipse the already enormous amounts of $150 billion worth of tariffs to which previous threats escalated from each country.

There’s a point at which throwing around ridiculously large numbers like this devalues how much money we’re actually talking about. To be perfectly honest, my brain doesn’t even really comprehend what $1 billion actually is (although I’d like to try with such a number added to my bank account).

To get an actual sense of how large these numbers really are, I turned to my old friend the interweb. More.com has a post on the subject that credits authors at Expand Your Mind with describing the numbers well:

Therefore, extrapolating from the Expand Your Mind information, in order to count to the $450 billion number President Trump is talking about in tariffs on Chinese goods, it would take 14,400 years of counting without ever taking a moment’s break. That’s 180 lifetimes using 80 years as the average lifespan.

Perhaps more helpful to understanding how significant this amount of money actually is would be comparing it to how much money trade between the U.S. and China adds up to in a year.

According to the U.S. Census Bureau, last year’s U.S. exports to China added up to $129.8936 billion. To make it simpler, I’m going to round that number to $130 billion (even though that is rounding up by more than $100 million). U.S imports from China added up to $505.47 billion in 2017. I’m going to do another gross bit of rounding and turn that number into an even $505 billion (yes, chopping close to half a billion dollars from the total). Let’s jut call 2017 an average year and add those numbers together to say that there is $635 billion worth of trade between China and the U.S. in a year.

I know there’s an economist out there somewhere pulling out his or her hair at the simplicity of how I’m throwing around these numbers, but when we’re talking about $450 billion, that number a little over 70% of the amount of trade done between U.S. and China in a year.

Maybe these very large tariff threats are no more than threats as the U.S. and China fight for leverage in trade negotiations. July 6th isn’t quite here yet, so maybe even the scheduled tariffs will go back on hold again instead of going into effect. But maybe we are at the beginning of a trade war that will drastically change the trade relationship between the U.S. and China.

I’m not an economist and don’t claim to know all the implications that come along with the tariff threats being made back and forth between the U.S. and China. But as the numbers being thrown around climb higher and higher, I have to ask if this is getting out of hand or if President Trump is really on his way to getting the U.S. a better trade deal with China. 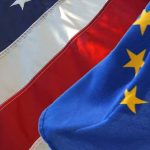