US & EU Tariffs On Verge of Trade War 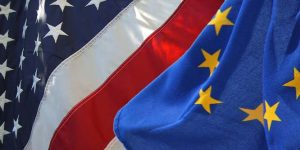 We’ve talked a lot about the escalating tariffs and tariff threats between the U.S. and China in this blog, but Asia is not the only battle front for President Trump’s trade wars.

There has also been backlash from countries in both North America and Europe over President Trump’s tariff moves. Today’s post looks at the escalating tariff tension between the United States and the European Union.

The EU has put new tariffs into effect against the U.S. in retaliation for President Trump’s steel and aluminum tariffs, from which he did not spare U.S. allies like the EU, Canada, and Mexico. Ben Meyer reported in American Shipper about the EU’s new tariffs:

The European Union on Friday officially adopted a long list of duties on goods produced in the United States in response to the Trump administration’s import tariffs on steel and aluminum.

These “rebalancing” measures will immediately target a list of products worth 2.8 billion euros (U.S. $3.27 billion) that includes steel and aluminum products, as well as a wide range of agricultural goods like corn, whiskey and cigarettes.

President Trump used national security as his legal grounds to levy taxes on steel at 25% and taxes on aluminum at 10%. It is clear the president intends to use the new U.S. tariffs as bargaining chips to create leverage and get better trade deals for the U.S. with countries around the world.

While Trump, since his election campaign, has had a clear emphasis on leveling the playing field when it comes to trade between the U.S. and China, it has also been obvious that he does not see the U.S.’s trade situation as satisfactory with many, if any, of its long-standing trade partners.

So far, President Trump’s tariffs have been met with scorn from other countries, and he has not yet reached the trade deals he hopes for. Instead, the U.S. is receiving retaliatory tariffs like the ones mentioned above from the EU that went into effect on Friday.

It is likely President Trump saw this response coming as without the bat of an eye, he is ready with further tariff threats to shoot back at countries’ tariff retaliations.

For China, threats have spiraled to intervals of $200 billion worth of tariffs. For the EU, President Trump targets the auto industry with tariffs if the member countries do not bend. Alanna Petroff wrote in a CNN article:

Trump threatened to make cars his next major target in a transatlantic trade tussle on Friday, saying they were in line for a 20% tariff if the European Union did not remove its own tariffs and trade barriers.

Should Trump follow through, analysts said that the European Union will be ready to strike back.

“Cars is a big deal. This is a much bigger deal than steel,” said David Henig, a former trade negotiator from the United Kingdom who worked on trade talks with the United States.

Cars worth €38 billion ($44 billion) are shipped each year from the European Union to the United States. It’s the biggest export market for an industry that forms the backbone of manufacturing in Europe.

President Trump’s threat of tariffs on cars from the EU is not strictly in response to retaliatory tariffs from the EU. The president demands the EU remove tariffs on U.S. cars in order to prevent the U.S. from imposing the tariffs on EU cars, so this tariff threat may have come either way.

Nonetheless, we’re now in the back and forth game. President Trump hits the EU with steel and aluminum tariffs, the EU hits back with retaliatory tariffs, Trump ups the stakes with car tariff threats, the EU looks for bigger retaliation to match…

The obvious short-term results are coiling tensions and spiraling tariffs. That is not good news for shippers, nor probably the U.S. economy as a whole, in the here and now, but it is hard to know what the end result will be.

That’s because they are “too crazy,” said Shiller, a professor of economics at Yale University.

“They are generating so much anger around the world. It’s not a sustainable policy,” he said…

However, that same article does highlight the bit of leeway President Trump has right now to levy tariffs in pursuit of better trade deals with countries around the world.

He told “Closing Bell” on Monday that the White House is probably thinking “if you can’t take on China now — when the economy is growing at 4 percent, when unemployment is nearly at record lows — when will you have the wherewithal to do that?”

The growing economy and low unemployment rate have boosted President Trump’s economic approval rating. In fact, the CNBC article says that the majority of Americans now approve the president’s handling of the economy for the first time since he was elected. CNBC cites a survey it conducted, showing 51% approval versus only 36% disapproval.

Basically, if President Trump is going to make the unpopular moves of levying tariffs at the risk of full on trade wars with other countries, he couldn’t ask for a better opportunity to do so. And that’s what Buchholz, as quoted in the CNBC article, was getting at:

However, Trump is someone who made his name in real estate and reality TV programming, said Buchholz, now CEO of educational start-up Sproglit.

“He knows a lot about game theory and this is a game he’s playing. We’re all participants in it, whether we want to or not,” he noted.

U.S. shippers likely don’t want to be participants in President Trump’s game; however, they’re at the top of the list of the most affected participants by the president’s moves. There’s good reason to worry about increased costs, possible loss of foreign business partners, and global competitiveness of U.S. companies.

The big question is, as Trump moves toward his endgame, will there be positive results for U.S. shippers after the initial negative impacts of escalating tariffs.