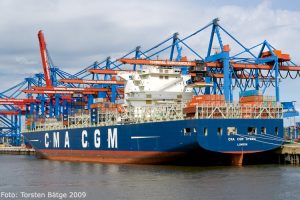 CMA CGM just made a move that we could see ripple through the international shipping industry. The carrier will charge a fee to shippers who are “no-shows” with their cargo or who cancel or transfer their cargo within a week of shipping.

The line says it will apply a $150 per teu cancellation fee on all equipment types, except reefer containers, from 1 June on applications to cancel or transfer a booking made less than seven days before the sailing date.

The fee will also apply to no-shows and will be applied to the party that made the booking – principally freight forwarders.

This fee is actually on European shippers and forwarders failing to deliver on booked container shipments to the Indian subcontinent, Middle East Gulf, and Red Sea ports according to the article. However, it doesn’t take much imagination to envision similar fees being levied on other routes, such as transpacific ones between the U.S. and Asia, and by other carriers.

Generally, when one carrier makes a move like enacting a general rate increase (GRI), the other carriers do likewise. It would be no surprise for CMA CGM’s cancellation fee to set a trend among carriers.

From what I’ve seen, no-shows from shippers along with rollovers from carriers are larger problems for shipments in Europe than in the U.S.; however, there is an industry wide reliability issue between shippers and ocean carriers.

Because the issue seems more prevalent in European trade routes, we could just see such fees spread across the other carriers when it comes to these European routes. Such fees on U.S. cancellations and transfers would likely garner complaints from shippers and freight forwarders to the Federal Maritime Commission (FMC).

Perhaps the best ground such complaints would have of convincing the FMC not to allow the fee is that shippers and freight forwarders would not have a similar recourse against carriers for blank sailings or container rollovers that can be so costly for shippers, delaying the receipt of cargo.

Of course, it makes sense that CMA CGM would issue this fee, combating a costly issue for the company. According to van Marle’s article:

“CMA CGM has been facing a large number of shortfalls due to late cancellations preventing us from accepting bookings on behalf of other valued customers,” the company said in a statement.

It will be interesting to watch if CMA CGM’s new fee really does become a trend throughout the international shipping industry.

The weekly loop will be operated in conjunction with north-south specialist Hamburg Sud of Germany, which was sold to industry leader Maersk Line…

The connection to Maersk is a nice bonus for CMA CGM in launching this new service.

CMA CGM is the third largest carrier in the world by capacity. In front of it are Maersk and the other member of the 2M carrier alliance, Mediterranean Shipping Company (MSC).

CMA CGM tried to enter an alliance called the P3 Network with Maersk and MSC until China halted those plans. Maersk and MSC quickly replaced the P3 alliance with the 2M. CMA CGM is now in the Ocean Alliance with China Cosco Shipping Corporation, Evergreen Line, and OOCL.