Explosion by the Port of Corpus Christi

While it wasn’t anywhere near as big as the devastating blast at the Port of Beirut a few weeks ago, a tragic explosion interrupted a U.S. port at the end of last week. On Friday, a dredging ship hit an underwater pipeline near the Port of Corpus Christi, resulting in the ship going up in flames.

Four people were killed and six more were injured. Those who were killed were initially classified as missing. Two of their bodies were recovered on Saturday, after which the search for the last two victims (who were presumed dead) was briefly suspended before the last two bodies were recovered on Monday. All this according to an article by Alexandria Rodriguez in the Corpus Christi Caller Times.

Rodriguez also described in her article what happened with the survivors:

Emergency crews aided eight people after the explosion. Six were taken to area hospitals, four by the Corpus Christi Fire Department and two by the Coast Guard. Two others refused treatment. Five people were then taken to hospitals in San Antonio for further treatment, officials said.

There has been much dredging at ports in recent years to make them capable of receiving the much larger containerships ocean freight carriers have been putting in the water. Corpus Christi, Texas is home to many oil refineries as well as ocean port terminals, likely making it a particularly dangerous area for dredging. However, dredging requires care around any ports where it is done.

According to a Reuters article, “The U.S. Coast Guard closed the Inner Harbor from Harbor Bridge inward of the Port of Corpus Christi ship channel.”

Ship traffic has since been allowed to start moving through the channel again, as the Port of Corpus Christi included the following in an new release update on the situation yesterday (Monday, August 24th):

The Captain of the Port has modified the safety zone in the Corpus Christi Ship Channel to allow vessel traffic throughout the Inner Harbor with restrictions. For the most recent Marine Safety Information Bulletins regarding the safety zone restrictions visit the Coast Guard’s Homeport site.

The Port of Corpus Christi’s news release on the situation from the day before shares the work being done to fight ecological damage from the event:

A piece of the dredging vessel was located in the middle of the channel and is in the process of being removed safely.

The Texas General Land Office, state lead for coastal oil spill response, is on scene working to identify and protect Texas natural resources and ensure the spill is contained.

Lawsuits have already been filed by families of those killed from the ship hitting the pipeline as well as by at least one of the men injured in the resulting fire. Alexandria Rodriguez reported on this in a separate Corpus Christi Caller Times article, in which she wrote, “Three of the lawsuits are seeking $50 million apiece. One is seeking $10 million.”

At Universal Cargo, our thoughts, prayers, and condolences certainly go out to the families who lost someone in this tragic event as well as those hurt by it. 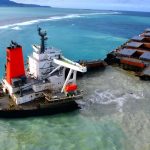