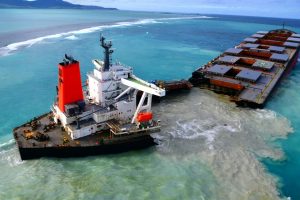 The International Maritime Organization (IMO), with its IMO 2020 regulation capping ships’ sulfur emissions at 0.5% and heavily publicized goal of cutting in half international shipping’s 2008 green house gas emissions by 2050, is the paragon of environmental governance, right? It’s a light in the dark smog of industry pollution. Well, the events surrounding the MV Wakashio oil spill paint a very different picture.

A couple months ago, on July 25th, a Japanese bulk carrier called the MV Wakashio ran aground on a coral reef just to the south of the island nation of Mauritius and an estimated thousand tons of oil spilled into the Indian Ocean. The IMO’s response has been extremely controversial, even though it’s receiving little to no attention by international shipping news sources.

It was actually an article last week from Forbes that caught my attention. “UN Ship Agency IMO Endorses Statement That Toxic Ship Oil Is ‘Just Like Skin Cream’,” its headline read. We’ve all seen enough misleading headlines from supposedly reputable news sources to understand I was skeptical about how that could be true. However, I opened the article to find a very thoroughly written piece by Nishan Degnarain.

Dgnarain didn’t bury the lead either, starting the article with:

The IMO issued a statement on September 15 standing by the comments of its representative in Mauritius who oversaw the disastrous oil spill clean up and salvage operation that is still ongoing.

In his comments to national media in Mauritius, the IMO representative had described the toxic ship oil spilled as being “Just like skin cream.”

In a statement on their website (which had been down last week due to a cyberattack against the IMO), the UN Agency not only described their Mauritius oil spill representative, Matthew Sommerville, as an ‘expert’, but also explained that he was supported by an entire IMO team.

“The IMO Secretariat is also supporting the response [to the Wakashio oil spill], by providing backstopping to the IMO expert in the field at the time of his deployment, and has been maintaining close liaison with the affected country, the flag State and technical partners throughout in order to provide support and assistance, as required.”

The article included a video containing the comparison of the toxic oil spilled to hand cream. I’ve shared it here cued up to the moment in question:

If this was just a story of a representative of the IMO downplaying the severity of the oil spill or being hyperbolic in explaining that this oil isn’t as bad as more traditional, thicker oils, well, that would still be bad but not likely to get a whole blog post here at UniversalCargo.com. However, this is just the tip of the iceberg. Or maybe I should say the tip of the Wakashio sticking out of the water after they decided to sink the rest of the tanker.

Yes, the tanker was intentionally sunk in the ocean somewhere off the coast of Maritius, raising questions of whether international law was broken, which was one of the many questionable decisions Degnarain wrote about in the Forbes article:

The IMO have also refused to answer questions posted by international organizations such as Greenpeace and Sea Shepherd whether international laws had been broken with the decision to sink the front section of the 300 meter vessel.

There are at least seven international environmental laws that have been highlighted.

While I haven’t seen much about the Wakashio oil spill and IMO’s response to it on international shipping news sites, the above quoted article is not the only exposé on the topic written by Degnarain and published by Forbes. Another article, titled “IMO In Hot Water Following Mauritius Oil Spill And Botched Wakashio Salvage Operation” was published back at the end of August. Both articles are scathing looks at the IMO’s response to the oil spill worth reading.

Here’s a taste from that August article:

Saying this has not been the finest hour for the global shipping regulator, the UN’s International Maritime Organization (IMO) would be a significant understatement.

46 days since the Panama-flagged, Japanese-owned vessel plowed straight into Mauritius’ largest and oldest coral reef system, questions are being asked about the role and effectiveness of the IMO.

The IMO was supposed to be the best face of the maritime industry – representing a cleaner, greener, more transparent, responsive and gender-balanced future of global shipping.

In the year that six major UN agreements were to be signed to give greater protection to life in the ocean (which was already under pressure from humans), one would have thought that a major oil spill amid the fragile coral reefs of a global biodiversity hotspot and high profile tourist destination, would have attracted some of the UN’s best scientists who recognized how important these unique species and ecosystems are, and would have worked night and day along with the Mauritian volunteers who were solely focused on protecting their island’s unique heritage.

Instead, Mauritius received representatives from the oil industry who acted on behalf of a UN agency – the IMO – shutting out local talent, and have been behind a series of increasingly catastrophic interventions that has now led to the loss of four local crew in Mauritius (three confirmed deaths and the captain still missing), the carcasses of almost 50 whales washing up on the Mauritian shoreline, 30km of heavily impacted oil-drenched beaches, a 300m iron ore carrier – larger than the Titanic – being deliberately sunk in an unknown location off the coast of Mauritius, and the 75m high stern of the vessel protruding like a giant tombstone on the once pristine coral reefs of Mauritius with no clear plan of how and when this will be removed, as the corals below are ground away each day with the strong currents and the supporting chains from the salvage operation….

Because Degnarain is a good writer, his comparative adjectives about what the IMO is supposed to represent for the future of global shipping – cleaner, greener, more transparent, more responsive, and more gender-balanced – serve as foreshadowing of all the things the IMO has proven itself not to be in its response to this spill. Degnarain covered these things in numbered sections to his article.

In the first section gets into IMO’s highly problematic involvement with the sinking of the MV Wakashio and lack of transparency surrounding that. After the sinking, whales and dolphins started washing up and an unknown brown substance was observed in the water.

The second section gets into the IMO’s failure to do basic testing and releasing of information required in a situation like this. Additionally, it gets into misinformation from IMO representative Matthew Sommerville, including the toxic oil is like hand cream comments discussed earlier.

The third section gets into the IMO rejecting the help and efforts from local experts and scientists in dealing with this crisis. Many of these experts would be in the best position to help having insight on the local marine biology that the IMO and outside scientists would not have.

The fourth section gets into the gender impact in the situation, starting with the statement, “Women were on the front lines of the oil spill in Mauritius – in both the response and in being on the receiving end of the impacts.” The section points out a gender imbalance in the impact of the oil spill and a complete derth of women in the IMO response teams.

“The actions of the IMO in what was once the paradise island of Mauritius has shown that this is a regulator that is out of touch and out of date,” Degnarain writes at the end of the article, concluding, “The world deserves better.”

The IMO’s actions in Mauritius do seem to be in direct contrast with its IMO 2020 regulation and talk about cutting carbon emissions in half by 2050. Is the former just mismanagement of a difficult situation? Is the latter just a diplomatic response to the highly politicized topic of climate change? Maybe the IMO is hoping Mauritius is too remote for people to care long enough for it to have to answer any tough questions about all this.

In the meantimes, I recommend everyone read Degnarain’s articles about the spill and IMO’s response. Here are the links again: 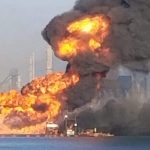 Explosion by the Port of Corpus Christiocean, Port