Hanjin Creditors Could Sue Shippers for Hundreds of Millions 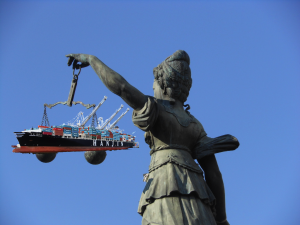 As if the Hanjin Shipping collapse hasn’t been bad enough for shippers, especially those who are customers of the bankrupt carrier, imagine the company or its creditors suing its shippers for hundreds of millions of dollars.

That’s a possibility according to a recent article from The Loadstar:

Shippers and forwarders could face multi-million-dollar bills from Hanjin if its creditors sue customers which failed to deliver all the cargo stated in the Minimum Quantity Commitment (MQC).

According to consultancy SeaIntel, shippers could face claims for between $40m and $300m.

This all hinges on lawsuits that are currently under appeal.

In 2011, The Containership Company (TCC) went bankrupt. TCC went on to sue 75 of the shippers it had contracts with. According to a 2013 article from Shipping Watch, half of those 75 lawsuits were settled, and others went to court.

It really can’t be understated how important, how impactful court rulings and the precedents they set are. People often don’t realize how much they affect their lives.

For example, the Supreme Court case Griswold v. Connecticut overturned a law against contraception and created a constitutional right to privacy that does not explicitly exist in the Constitution. That right to privacy was then used in many court cases, including Roe v. Wade, which gave women the legal right to have abortions in this country.

If, ultimately, TCC wins its appeal in suing shippers it had contracts with, the precedent it would set could open the door for Hanjin or its creditors to sue the shippers with whom it has contracts.

TCC offered below market freight rates for shippers who agreed to Minimum Quantity Commitments (MQCs). There’s probably a lesson to be learned in there about getting what you pay for. On its way to bankruptcy, TCC discontinued the service but then “sued several shippers for breach of contract claiming the shippers were required to pay liquidated damages for failing to satisfy their MQCs,” according to a Lexology.com article.

Lexology.com does a wonderful job of thoroughly explaining the case. You can read that article for all the details, but here are a few key details from it:

After analyzing a form of Contract and the parties fact statements, the Bankruptcy Court ultimately recommended that the District Court find the Contracts valid and enforceable because the Contracts contained the hallmarks of a contract and the specific terms required by 46 U.S.C. § 40502(c)….

The Bankruptcy Court also concluded that TCC did not breach the covenant of good faith and fair dealing by filing the adversary proceedings….

Nevertheless, in its other findings, the Bankruptcy Court did recommend granting summary judgment in favor of the shippers after concluding that TCC’s termination of the Taicang-Los Angeles route excused the shippers’ MQC requirement….

Here’s how The Loadstar article that started this blog entry summarizes the significance of this case for Hanjin customers:

SeaIntel uses an assumption that about 20% of import shippers do not meet their MQCs, which would mean that Hanjin could have faced a shortfall of some 460,000teu. SeaIntel estimates damages could be $250 per teu.

While contracts covering the 2016-17 year are not relevant, as Hanjin stopped sailing four months in, the previous year’s agreements could be critical as the contract period has expired, and the court has ruled they are enforceable.

TCC shouldn’t even need to win its appeal in suing its shippers in order for Hanjin or its creditors to sue its customers, as the court did rule that the contracts were valid in the TCC case, even if it did find in favor of the shippers.

The Loadstar points out that Hanjin going forward with such lawsuits would be a “nuclear option” that would destroy all hopes of company becoming a viable carrier again. However, many believe there is little chance of Hanjin actually coming back from this collapse. And as the Loadstar says, “if Hanjin is not revived, creditors may want to claim damages.”

For shippers this would be adding insult, and further injury, to injury.