Is There Trouble in 2M Alliance?

Don’t look now, but it seems like the honeymoon might be over between Maersk and Mediterranean Shipping Company (MSC) in their 2M Alliance.

There is no news about the premier carrier alliance between the two biggest shipping line companies by capacity in the international shipping industry dissolving. However, there has been some public disunity since the collapse of Hanjin Shipping.

Hanjin’s collapse gave the 2M carriers an opportunity to snatch trans-Pacific market share. So much so that Maersk and MSC started backpedaling on the idea of letting Hyundai Merchant Marine (HMM) join 2M, the only benefit of which was to increase their presence in Asia-U.S. routes.

The 2M carriers aggressively moved in on Hanjin’s customers.

The carriers started a new service to fill in the gap that Hanjin’s collapse left behind called TP1. Or was it called Maple?

Here’s where cracks were first seen between the two carriers. Their “joint service” was being described in different ways by Maersk and MSC.

A short article from American Shipper highlights the differences in how the carriers described the new service:

On Sept. 7, MSC and Maersk had said they were going to start a new 2M service to assist shippers who saw a sudden drop in capacity when Hanjin Shipping filed for receivership and stopped booking cargo. MSC called the new string its “Maple” service, while Maersk dubbed it the TP1.

Though the companies said they would offer the service jointly, they gave very different versions about what the service would eventually look like.

Those are really pretty small details though, right? It’s just the name of the service and its destination that the alliance partners weren’t on the same page about.

It didn’t take long for those little cracks to turn into much more of a rift between the carriers when it comes to this trans-Pacific service.

Alphaliner reported that after only three successive sailings, 2M stopped advertising the TP1/Maple service. Reports started popping up that the service, which Maersk had called long-term, was suspended.

Now all the headlines are about MSC leaving Maersk out on the trans-Pacific service, ignoring the TP1 joint service tag Maersk had given the service and calling the Maple service exclusively from MSC.

Here are excerpts from one such article by the Loadstar on the topic:

MSC confirmed today that it will resume its Asia-US west coast Maple service at the end of the month as an “exclusive” product.

It follows the 2M loop with Maersk being suspended after only three sailings.

Last week, Alphaliner reported that the 2M alliance had suspended the extra loader, dubbed TP1 by Maersk calling at Yantian, Shanghai, Busan and Long Beach. Now, MSC has said the service will resume with the sailing of the 4,675 teu MSC Rochelle on Friday 28 October.

The service was also advertised with a call at Prince Rupert, but the Canadian port was omitted from all three sailings and has been dropped by MSC.

A press release from Maersk Line on 7 September announced the new TP1 service and said: “We are responding to increased demand in the transpacific. With supply chains disrupted, many customers are approaching us for transport solutions for their cargo. The TP1 service is a stable, long-term solution to meet our customers’ needs.”

However, after just three sailings, Maersk Line rowed back on the “long-term” commitment and said: “We are reviewing the plans for TP1 and will update customers and the market in due time. In the meantime, we are deploying extra loaders according to the customers’ needs.”

This suggests a disagreement between the 2M partners over strategy…

All this is coming right on top of the news that Maersk is splitting into two divisions, with a division devoted to shipping focused on acquiring other carriers in the international shipping industry that are struggling.

It is unknown how MSC, as a company, feels about Maersk’s recently publicized strategy. The Loadstar article does point out that MSC seems to be wanting to gain trans-Pacific market share made available by Hanjin’s exit through organic growth while Maersk may be interested in acquiring Hanjin’s Asia-U.S. network that just went up for sale.

Many assume because of Maersk’s announced strategy to acquire other carriers to grow, the company will make a bid on Hanjin’s assets. There have even been reports, and denials from Hanjin, that the bankrupt carrier contacted Maersk and MSC about buying its assets.

I, on the other hand, do not believe Maersk will go after Hanjin’s assets, but save its available capital for going after struggling carriers that have yet to go under. We should find out by early November whether or not Maersk is going to try to acquire Hanjin’s assets.

Even more interesting to watch will be the relationship between Maersk and MSC to see if this trans-Pacific service snafu really is an indication of trouble in paradise.

Beyond the disunity on this route service and possible differences in strategies, there are other factors that could be putting stress on the 2M relationship.

South Africa’s Competition Commission searched the premises of six shipping companies including AP Moeller-Maersk A/S as part of an investigation into allegations that they colluded to fix incremental cargo rates between Asia and South Africa.

MSC confirmed that its premises were among those searched and said it’s assisting the relevant authorities with their investigations.

Of course, rate fixing is one of the biggest fears shippers had of carrier alliances from the beginning and one of the top things governing agencies are supposed to be keeping watch for with the approval of vessel sharing agreements between shipping companies.

This is not nearly the first price fixing probe in the international shipping industry that these carriers have had to deal with. Such legal investigations may add stress to the operational marriage between Maersk and MSC.

Speaking of marriage, I’ve often heard it said the number one cause for marital problems and divorce is financial problems. Everyone knows carriers have been through financial stress for several years, with Drewry even saying another collapse like Hanjin’s is likely.

While MSC has one of the least transparent financial situations in an industry that is almost financially opaque, MSC has definitely faced the same challenges as all the rest of the carriers. If its true for a regular marriage, why not a business marriage? Financial stress could be one more factor aiding possible cracks in the 2M carrier alliance. 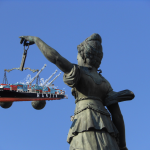