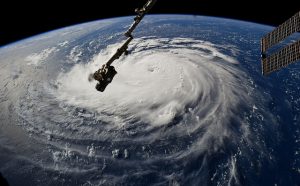 When it comes to international shipping in regards to the U.S. and China, trade war has been dominating the news. But as this week draws to a close, two huge, potentially deadly storms are hitting the countries.

Hurricane Florence is particularly scary for people in the Carolinas as it’s hitting there right now. Holly Yan and Nicole Chavez report in CNN:

Just as Hurricane Florence closes in on the Southeast, the area covered by hurricane-force winds has doubled — meaning far more people will get blasted with winds 74 mph or greater.

When it comes to international shipping, Hurricane Florence obviously caused the Coast Guard to shut down the Port of Charleston. However, there are more U.S. ports affected.

Here are some impacts of Hurricane Florence on ports from an American Shipper article by Chris Gillis that was posted yesterday:

While not anticipating a direct hit from the hurricane, Virginia and Maryland also are preparing for possible heavy rains and up to 30 mph wind gusts from the storm.
…

… per the Coast Guard, the Port of Virginia’s main shipping channel remains closed at the Virginia Capes and no vessels are currently entering or leaving the port.

The Maryland Port Administration also cautioned its marine terminal tenants to make preparations for the storm, including “securing missile hazards and clearing nonessential equipment and gear from berths and piers.”

Still, that disruption to international shipping could be far less than the disruption Super Typhoon Mangkhut will cause on the other side of the world.

Super Typhoon Mangkhut is on track to hit the northern Philippines with its strongest winds on Friday before striking Taiwan and then possibly veering south toward Hong Kong and mainland China.

As many as 43 million people could be exposed to cyclone-strength winds, according to the Global Disaster Alert and Coordination System. Its winds are expected to intensify Thursday and Friday — reaching speeds as high as 161 m.p.h. — before weakening Saturday, the Hong Kong Observatory said.

A.P. Moller-Maersk, the Danish line, said there is a “high risk” the typhoon could affect its operations in Hong Kong and the Pearl River Delta, which may require port operations to be suspended and its vessels to be moved.

The company is “evaluating potential port congestion following the typhoon, however, most our planned vessel calls are currently expected to maintain their schedule”, a Maersk spokesman said.

Orient Overseas Container Line, a Hong Kong-based unit of China’s Cosco Shipping Holdings, has been diverting its ships at sea from the path of the storm and the company will divert them “when and where it is safe to operate”, said Mark Wong, a company spokesman.

Around 12,000 people have been evacuated from low-lying parts of China’s Guangdong province and shipping halted ahead of the arrival of Typhoon Barijat Thursday, according to state media.

But the real concern is Super Typhoon Mangkhut, which is still gathering strength as it nears the northern Philippines.

Super Typhoon Mangkhut is the equivalent of a category 5 hurricane, making it potentially devastating. Thoughts and prayers are with the people in its path as well as those in the path of Hurricane Florence. 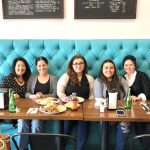 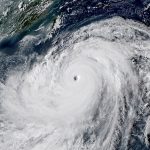