Shippers are preparing themselves for the more and more likely outcome of a rail strike in November. Union Pacific CEO Lance Fritz went on CNBC, laughing off the idea of a perspective strike on November 19th; however, the events of the week make the risk of that strike very high. The strike threat is no joke as it is estimated to carry an economic cost of $2 billion per day as it shuts down national supply chains.

Fears of a strike had already risen back up after members of the Brotherhood of Maintenance of Way Employes Division (BMWED), the third largest of the dozen rail workers union, voted to reject the tentative agreement the White House applied pressure on the railroads and unions to reach in order to avert a strike before the midterm elections.

Those fears of strike were legitimately stoked last week after the railroads flat out rejected the BMWED’s offer of a new agreement.

US freight railroads rejected a new sick leave proposal from a union of track maintenance workers that is threatening to go on strike in less than 30 days without a new labor deal.

BMWED proposed seven paid sick days — up to 56 hours per year — as part of a new contract agreement, which the railroads outright rejected, according to Peter Kennedy, BMWED’s director of strategic coordination and research.

Of course, no business wants to see its supply chain disrupted. And obviously, a rail shutdown caused by a strike would be extremely disruptive. With the threatened rail strike only a few weeks away, many importers have shipments arranged that would arrive just in time to get delayed by this threat. They have to find ways to prepare.

Despite trying to laugh off the strike threat on TV, Union Pacific, along with the other railroads, is preparing for a strike disruption too.

In a CNBC article, Lori Ann LaRocco outlines how railroads and shippers, many of whom were already preparing for a potential strike to hit a month ago, are again making plans to deal with the potential strike:

Tom Nightingale, CEO of AFS Logistics, tells CNBC that logistics managers are fielding calls from customers in anticipation of a possible strike.

“Prudent shippers already had a plan in place a month ago, and most who did not have now ramped up their contingency planning after the wakeup call last month,” Nightingale said. “Proactivity is the key to supply chain success.”

For many intermodal shipments — shipments that use multiple modes of transport such as ocean, trucking and freight rail — there can be a week between when cargo is picked up and when it makes it onto the rail lines, according to Nightingale.

“That lag time will exacerbate the effects of delays and service interruptions, so effectively managing the risk of intermodal disruption means you must plan early and often,” he said.

In anticipation of a strike in September, Norfolk Southern, Berkshire Hathaway subsidiary BNSF, CSX, and Union Pacific all began ramping down freight approximately five days ahead of the strike date in an effort to move critical hazmat materials, such as chlorine and ethanol. That freight took priority over common freight.

“Shippers had a lot of sensitivity to the potential rail strike,” Nightingale said. “No shipper wants to lose their job or risk losing a customer when they have had this much advance notice to a looming disruption.”

As a result, AFS saw a significant uptick in customers looking to shift loads away from intermodal to other modes like truckload and even less-than-truckload shipping (LTL).

A strike by one rail worker union is bigger than that one union going on strike. If one union goes on strike, none of the others are expected to cross its picket lines. However, if a rail worker strike does happen, it is not likely to last long. Congress has the ability to shut it down.

The last time a rail strike happened was all the way back in 1991, and Congress shut it down within a day.

Congress can order more cooling off periods, order arbitration, and even force the unions to accept a contract with the recommendations from the Presidential Emergency Board that was appointed to look at the dispute. That would basically mean putting into effect the tentative agreement that BMWED’s rank-and-file rejected.

Congress couldn’t simply sit back and do nothing as the nation’s supply chains shut down. I would expect Congress to act quickly if a strike does happen on November 19th. There is a bit of a timing problem with that date being so soon after the midterm elections. It means the newly configured Senate and House will have to hit the floor running or the country’s economy could screech to a halt. 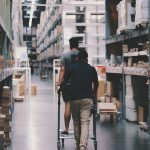