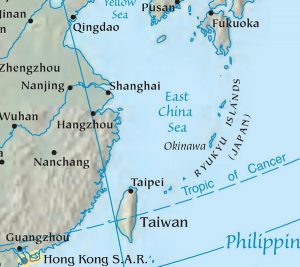 A fire still burns even though the collision that created it between the oil tanker Sanchi and the cargo ship CF Crystal happened Saturday.

BBC News reported that the oil tanker was an Iranian ship with about one million barrels of condensate containing 136,000 tonnes of the ultra-light version of crude oil and 32 crew members, 30 of which were Iranians and two were Bangladeshis.

While all 21 Chinese national crew members onboard the cargo ship, which was carrying 64,000 tonnes of grain from the US, were rescued, all 32 crew members of the tanker were missing at the time of the initial reporting from BBC News.

On top of the missing crew members, BBC News reported an oil slick from the collision. This was being reported as a big spill with worry that all 136,000 tonnes of the condensate oil would end up in the sea.

A report three days later from BBC News said, “No large oil spill has been detected” from the tanker. That’s the good news. The bad news is that 31 of the 32 crew members from the ship are still missing with one body having been found at the time of the writing of this article

The tanker Sanchi still burns, toxic gas is being released from the ship, and bad weather creates hard to deal with wind and waves. All of this combines to make rescue operations extremely difficult.

On Wednesday, an explosion on the tanker forced a retreat. According to the Chinese Transport Ministry, the blast occurred while rescue crews doused the ship with foam to try to put out the flames. It’s unclear what kind of damage the explosion caused.

Such explosions are very worrisome because a major oil spill could be released. Erickson also wrote:

Since the crash, the Sanchi has been billowing thick plumes of black smoke. Unless the fire can be brought under control, officials worry that an explosion might sink the ship, releasing its 1 million barrels of oil (which amounts to 42 million U.S. gallons) into the water.

The resulting spill would be about three times as big as the Exxon Valdez spill of 1989, one of the worst environmental disasters in history. The oil spilled would be double what the Prestige tanker released when it sank off the coast of Spain in 2002. That accident damaged beaches in France, Spain and Portugal, and led to the closure of one of Spain’s richest fishing areas.

The East China Sea just happens to be major fishing waters for the important Chinese fishing industry. A major condensate spill in these waters would have a major impact, likely closing this important fishing area.

Remember, the oil we’re talking about onboard the Sanchi is more toxic than regular crude oil. The second BBC News article quoted above illuminates the difference between condensate and crude:

Condensate is very different from the black crude that is often seen in oil spills.

It exists in gas form within high-pressure oil reservoirs and liquefies once extracted.

It is toxic, low in density and considerably more explosive than regular crude oil.

Erickson even went on in her article to add that condensate “also is nearly colorless and odorless, which makes it difficult to detect.” She then quoted yet another BBC article:

“This stuff actually kills the microbes that break the oil down,” Simon Boxall of the National Oceanography Center at the University of Southampton told the BBC. “If she sinks with a lot of cargo intact, then you have a time bomb on the sea bed which will slowly release the condensate.”

In Iran, criticism is growing for China with concern that the Chinese are more interested in protecting its fishing industry and the water from oil than rescuing the mainly Iranian crew of the Sanchi, according to a Middle East Online article.

While hope is being held on to that the Sanchi crew is alive somewhere in the tanker, the fire, explosions, and toxic gas make it seem very unlikely there are still survivors onboard.

This is a time when prayers should go out for the families and friends of those crew members as well as the firefighters and rescue crews fighting the blaze.