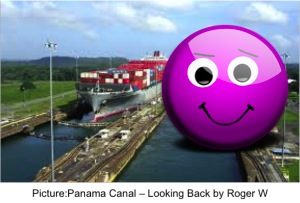 “Don’t call it a comeback; I been here for years.”

I can just hear the Panama Canal saying those LL Cool J words as it regains market share from the Suez Canal on Asia to U.S. East Coast container shipping. As if canals can actually speak.

The opening of the Panama Canal expansion is already effecting a major shift in cargo shipping from Asia to the U.S. East Coast.

Over the last several years, the Suez Canal has been growing in its market share of shipping containers transported by cargo ship from Asia to the U.S. East Coast to the point of the route handling a larger share of the cargo transport than the Panama Canal.

Barely more than a month has passed since the inauguration of the canal’s expansion, but the Panama route has already retaken its lead in market share.

Alphaliner, in issue 28 of the 2016 volume of its newsletter, says:

The Panama Canal this month regained the majority share in terms overall container transport capacity on all-water routes between the Far East and the US East Coast….

The route via Egypt had grabbed a substantial market share of Far East – USEC services in the past few years, as economies of scale and vessel cascading led carriers to deploy 5,500-10,000 teu ships via the Suez Canal, rather than continuing with classic panamax units of 4,000-5,000 teu on the shorter Panama route. Despite the increased distances for some China – USEC port pairs, the Suez route made economic sense, as the scale advantages of lager vessels often outweighed the disadvantages of the longer steaming distance. Now that the old Panama locks’ restrictions have been lifted, the canal is making a strong comeback, regaining much of the all-water market share that was lost to the Suez Canal.

The overall all-water weekly capacity stands at 145,600 teu as at July 2016, for a year-on-year growth of 1.7%. After the launch of the new locks, the Panama Canal’s share of the trade now reaches 57%, compared to 48% at the start of this year. It is expected to increase further over the coming months, as some carriers have yet to up-size their Panama services with neo-panamax and LCS tonnage, while also shifting some of their current trans-Suez services to Panama.

Despite some worries about the new Panama Canal locks’ construction and accidents with large ships hitting the expanded canal’s walls, the sudden shift of container cargo from the Suez Canal to the Panama Canal should only be the beginning.

Many shipping lines have announced plans to move larger container ships through the Panama Canal, shifting their current routes. As these plans take place, Panama’s market share will continue to increase while the market share of containerized cargo through the Suez Canal will decrease.

Still, those accidents happening in the Panama Canal are not insignificant and should be monitored. If ships continue to hit walls, damaging the ships, cargo, and the canal itself, shipping lines may decide the risk outweighs the benefit of the increased cargo loads that can go through the Panama Canal.

So far, no shipping line has announced a change of plans away from the Panama Canal in response to the accidents, leaving the battle for Asia to U.S. East Coast containerized shipping in Panama’s favor.

Right now, the expanded canal is eyeballing the Suez Canal and yelling, “Panama said knock you out!” 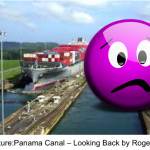