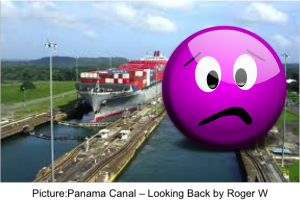 After being open for about a month, the enlarged Panama Canal already had three accidents according to the BBC article:

A Chinese container ship has hit a wall of the recently-widened Panama Canal, amid concerns that it has less space for manoeuvres and could be unsafe.

It is the third accident of this kind since the multi-million dollar expansion opened a month ago.

The Xin Fei Zhou, owned by China Shipping Container Lines, suffered a large gash in its hull and is now undergoing repairs.

I guess if ships are going to hit walls, now is the time to for it to happen. It is the time of year for hitting. Across the U.S., NFL teams have begun training camp with players donning pads and hitting each other. Maybe we should just put pads on the Panama Canal’s walls as well as the ships traversing the canal and let them collide, because it seems doubtful we can stop ships from hitting the walls.

Quarterbacks wear red in camp to signify they should not be hit; can we get those Panama Canal walls painted red?

It is unlikely painting the walls red would actually help. There just isn’t enough room for neo-panamax ships to get through the new locks of the Panama Canal.

In a previous blog titled 5 REASONS THE EXPANDED PANAMA CANAL MAY BE TOO RISKY FOR SHIPPERS, I quoted a Hellenic Shipping News article that details how the locks are too small for the largest ships that are now being sent through the canal:

Industry bodies have warned that at 427 m long and 55 m wide, the new locks are too small for the neo-panamax. The largest vessels can measure up to 366 m long and 49 m wide, leaving a distance of just 6 m across the width of the canal and 61 m length-wise, much of which will be taken up by tugboats on either end of the vessel to guide it through the lock. A joint study by the International Transport Workers’ Federation (ITF) and Brazil’s Fundação Homem de Mar (FHM) found that under windy conditions the manoeuvrability of vessels would be compromised, making accidents likely due to the lock’s narrow dimensions.

What are your thoughts and feelings about shipping through the Panama Canal? Let us know in the comments section below. 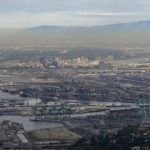 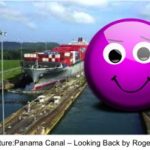