China’s atrociously insane “Covid Zero” policies have Shanghai, a central hub for international shipping and the third most populous city in the world, in an indefinite lockdown. While Chinese authorities claim that the “closed loop” operations at the Port of Shanghai are keeping things operating normally there, anyone who takes even a glance at the related data knows that’s not true.

Yesterday, Universal Cargo’s CEO Devin Burke texted me the picture to the right, showing ships that were waiting outside the Port of Shanghai. You take a look at the picture and tell me if it seems a little congested.

If you go back to February, before China’s massive lockdowns, only 14.8% of the world’s ships waiting outside of congested ports (and there were significantly fewer overall) were waiting at Chinese ports.

If you’re wondering if that comparison goes back too far, it doesn’t. Yes, the Shanghai lockdown didn’t start until early April, but remember that China locked down Shenzhen in March.

In a PDF document about the effects of China’s lockdowns, Winward shares:

As data pulled from Winward’s Maritime AI platform clearly shows, lockdowns in China are heavily impacting the congestion outside the country’s ports, as the number of container vessels waiting outside of Chinese ports today is 195% what it was in February.

… in the April and March snapshots, there were 506 and 470 vessels, respectively, stuck outside of Chinese ports. In February, that number was only 260. In essence, lockdowns in China have nearly doubled the congestion outside the country’s ports.

The same kind of super successful “closed-loop” system China is using to keep ports operating “normally” despite massive lockdowns is now being implemented to restart manufacturing in Shanghai.

“Closed-loop” means that employees have to stay at their place of employment rather than go home at the end of a workday. They may not have a home to go to anyway, as some Shanghai citizens who live in large apartment complexes have been forcibly removed from their homes to turn them into quarantine facilities. Plus, if workers are allowed to leave their workplaces, they may catch and/or spread a virus that has an incredibly low percentile chance of making that worker seriously ill, especially since China’s lockdowns are in no way stopping that virus from spreading.

Yeah, it all makes sense.

According to a Reuters article, the Chinese government has put together a “white list” of 666 firms prioritized for reopening under this “closed-loop” system.

Let’s just pretend that 666 number has no other significance in the world. It’s surely just coincidence. Eric Kulisch did a nice job of avoiding bad numerical associations in his American Shipper article about China trying to ease the lockdown’s supply chain crunch by calling it “more than 660 enterprises” China put on its “white list.”

Kulisch reports that of these enterprises, “many [are] in the automotive, semiconductor, consumer electronics and biopharma sectors” and they include “state-owned automaker SAIC Motor Corp., Volkswagen and Tesla’s electric car factory.”

The firms must follow this “closed-loop” model of keeping workers from leaving factories, living there until… well, who knows when.

If you couldn’t tell with only a cursory look at how congestion is doubling at Chinese ports, a “closed-loop” system inside of a lockdown is not going to be as productive as normal conditions.

Factories are and will have similar problems. Kulisch shares a good example in his article:

A major challenge for factories is getting raw materials and components needed to maintain production while access to the ports is sharply reduced and many supplies are stuck offshore on waiting vessels.

The Tesla (NASDAQ: TSLA) plant opened with only one of its two shifts, cutting productivity in half, according to a tweet from Ming-Chi Kuo, an analyst at TF International Securities. At that output, Tesla has about 2.5 weeks of inventory and can produce 25,000 to 30,000 units per month, down significantly from pre-crisis levels. Kuo said Tesla’s hourly work rate won’t return to normal until mid-May, at the earliest.

It doesn’t take much knowledge about supply chains to know that problems at any point in a supply chain effects the supply chain as a whole. In order for factories in China to have a chance at a return to normal by mid-May, this indefinite Shanghai lockdown would need to end extremely soon. For the moment, all we can do is watch disruption pile on top of disruption as China continues its horrible Covid Zero policy.

And, of course, those disruptions are spreading through the gobal supply chain, but that’s a blog for another day. 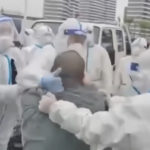