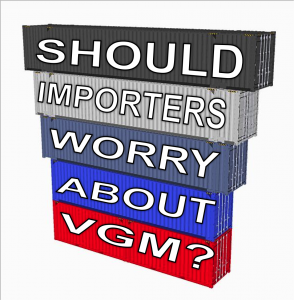 Should Importers Worry About VGM?

For many exporters, imagining the little girl from Poltergeist saying that first line of this post fits perfectly with the mood created by the arrival of the new rule from the International Convention for the Safety of Life at Sea (SOLAS) requiring shippers to provide the verified weight of loaded shipping containers in order to get them loaded onto cargo ships.

Exporters have been worrying about being in compliance, the costs it might create, the operational changes it might require, what kind of fees and penalties might be levied against them if they’re not in compliance…

The main focus has been on exporters; however, importers are worried too. Should they be? Is this an issue that only exporters need to worry about? Could fees come importers’ way if their shipping partners overseas are not in compliance?

I received an email today in response to a previous blog I wrote about the VGM rule asking about the importers liability in this whole process:

I understand that you did some research on [the VGM rule], which is in effect tomorrow.
Checking to see if you have gotten anything about possible penalties? I know that the shipper is supposed to provide signed docs on the gross mass, but what if it’s not done or it’s not accurate?
Will the importer be liable for anything?

Despite this rule having been officially approved and adopted by the International Maritime Organization’s (IMO) Maritime Safety Committee in 2014, there are still so many unanswered questions two years later as the rule is being implemented.

Exactly what enforcement will look like on the VGM rule is one of the biggest question marks on the subject. Those who are charged with enforcing this rule haven’t been the most helpful on the subject.

… government bodies, the competent authorities to which the IMO is looking to consistently enforce the regulation across the globe have been surprisingly reticent.

Despite encouragement from the IMO for governments to communicate fully with industry stakeholders, around 80% of SOLAS signatory states have yet to publish guidance on national implementation.

There are, of course, notable exceptions, where national competent authorities have engaged actively with industry and other maritime administrations to ensure common understanding of the processes and interpretation of the regulation.

Consistency, however, across the international governmental spectrum has been lacking, causing much frustration.

That frustration is paired with worry.

There’s good reason for worry and frustration as governing bodies have not made it clear what the fees and penalties for failing comply with the new VGM rule will even be.

Could importers be liable for these unknown VGM rule violations?

Here’s my response to that question brought up in the email I quoted above:

The weight of compliance falls on the shoulders of shippers. It is expected that fees and penalties for lack of compliance will be levied against shippers.

Exactly what those fees and penalties will be is still unclear. Which seems crazy with the VGM rule going into effect tomorrow.

There is no official grace period for the VGM rule once it goes into effect tomorrow.

It seems the various governing bodies around the world can choose what they deem appropriate in terms enforcement, so there could be a wide range around the world in fees levied against violators of the rule.

Importers should make sure their suppliers and shipping agents are in compliance with the rule as there are situations that would make the importer responsible for any fees or penalties that may arise from failure to provide a VGM.

The type of incoterm deal an importer has would probably determine how responsible the importer (as the buyer) is for fees that might accrue during the import process.

An EXW deal, for example, would make the buyer/importer responsible for the loading and transporting of goods. It is, therefore, reasonable to think that with the assumption of those risks, the fees for not complying would be paid by the importer in an EXW agreement (or any incoterm deal in which the buyer is responsible for the costs and risks through the loading of goods onto a ship).

Deals where the seller assumes the early risks of getting the cargo loaded onto a ship (such as DDP, on the opposite end of the spectrum of EXW), the importer shouldn’t have to worry about such fees. That would all fall under the seller’s responsibility.

However, if the seller is not in compliance, the goods are not supposed to be loaded onto a ship. This could cause harm to the importer through quite possibly very long delays while the seller of the goods (or the seller’s shipping agents) gets the cargo into compliance.

So again, even if the importer is not liable for fees accrued through noncompliance with the VGM, the importer should still make sure his or her partners in other countries are in compliance.