The Truth About the New ILWU Contract After the news broke that both the Pacific Maritime Association (PMA) and International Longshore & Warehouse Union (ILWU) voted to ratify the new West Coast longshore contract, the Los Angeles Customs Brokers and Freight Forwarders Association (LACBFFA) forwarded an email to its members from “Our Man in DC” Peter Friedmann.

Peter Friedmann has been a great source for information on the ILWU contract negotiations and government action that affects international shipping.

So what was the new email from Friedmann all about? The subject of the email sums it up:

Peter Friedmann started the email by tempering celebrations over the new contract saga finally coming to an end and providing five years before negotiation drama hits again. He warns that we don’t really have as long as that.

“Today people are celebrating ILWU ratification of a new five-year contract. BUT IT’S NOT TRUE,” says Friedmann in the email. “It is a four-year contract; expires at the end of June 2019.”

Friedmann is right that this contract expires in four years. So from the shipper’s point of view, it seems to only be a four-year contract. However, it is technically a five-year contract because it goes into effect retroactively.

The negotiation process between the PMA and ILWU took over a year. The old contract expired on July 1st, 2014. That means the new five-year contract’s start date is July 1st, 2014 even though it wasn’t ratified until May 22nd, 2015. The result is that the “stability” of a union contract that shippers need to count on West Coast ports to move their imports and exports has only four years left, as Friedmann says.

The main point of emphasis of Friedmann’s email was not how long the ILWU contract actually is. The main focus was on how the jurisdiction the ILWU was given over the repair and maintenance of chassis will impact the process of moving shipping containers in and out of West Coast ports.

Friedmann lays out the new procedure of ILWU inspectors checking chassis that has truckers worried, and frankly, has shippers worried, too:

Now what? Come this Tuesday the ILWU starts checking chassis for “road ability”. There is more than a little concern on the part of the dray truckers, about the opportunity for ILWU inspectors to “impact” the process:

All pool chassis and leased chassis must go through roadability at all terminals on the West Coast. Trucker owned chassis and bobtails may use bypass but are subject to verification of ownership if asked. If minor repairs are found to be needed on a pool chassis the repairs can be made during the inspection. If repairs are found to be needed on leased or owned chassis the container will be removed from the chassis and driver will be allowed to exit the terminal. Please be patient at the terminals as all will be experiencing this new procedure.

Already, this could slow things down at the ports. More alarming is the potential that these inspection have to be abused. It’s not hard to imagine the ILWU using inspections to create slowdowns or hard-time ports or terminals over labor disputes.

Friedmann also provides specifics of the “roadability” inspection requirements in his email:

How smoothly ILWU inspections of chassis go will be something to watch in the upcoming months.

What are your thoughts on the new ILWU contract? Share them in the comments section below. 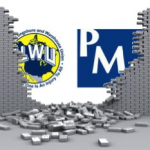