Freight rates from Asia to the U.S. are still very high. In fact, still historically so according to Greg Miller’s American Shipper article published on Tuesday. However, they have come down a little bit. That’s something for U.S. importers who have seen nothing but sky-high freight rates for the last year with no end in sight.

Let’s have some Miller time – no, not cracking a cold one, but that does sound like more fun than talking freight rates. Miller reports in his American Shipper article:

… As of Tuesday, Xeneta pegged the average long-term contract rates for Asia-West Coast cargo at $2,030 per forty-foot equivalent unit (FEU), up 33% from a year ago.

That sounds bad, but during a presentation a month ago, on March 23, the number was much worse: Xeneta listed that day’s average Asia-West Coast rate as $2,640 per FEU, up 50% year on year.

What Does It Mean for Spot Freight Rates?

Most of the shippers who read our blog are likely operating in the spot rate space rather than the contract space when it comes to freight rates. Contract rates are reserved for the big beneficial cargo owners (BCOs) – the Targets, Best Buys, and Walmarts of the world. However, spot rates play a factor into how high the freight rates are in BCO contracts.

The idea, or at least the goal from the shippers’ point of view, is contract rates allow BCOs to pay less than the spot rate amounts for their shipping. It also gives them cost points they can plan on for the year. The current spot rates and projections for the spot rates plays an important part in negotiating what the contract amounts are.

That contract prices are significantly decreasing from the kind of rates seen a month ago likely means some spot rate drops or projected spot market freight rate drops. Of course, shippers shouldn’t get too excited by that as contract rates are still significantly higher than they were a year ago.

This is also traditionally a slow time in the market when fewer goods are shipped, especially compared with the upcoming peak season. Despite it being the slow part of the year, demand is still high for international shipping. Despite demand being unusually high, it does appear to have come down a little but in April.

I often use Universal Cargo’s shipping numbers as a barometer for the industry, and transpacific shipping in particular. There was about a 13% drop in shipments from March to April. Additionally, some of the end of month projected shipments in April could end up being reclassified as May shipments.

Despite that drop in shipments, April remains strong. Still, there could be a little bit of decline in freight rates coming as a result of the little decrease in demand. That’s especially true as there was just a little surge in rates.

However, a large dip is not expected. In fact, rates appear like they will remain high right up until and through the peak season. 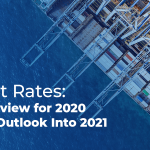