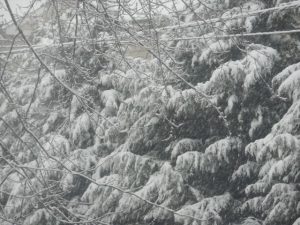 The East Coast was hit with what the Weather Channel called “one of the most intense western Atlantic winter storms in decades” last week. White out snow, 50 mph gusts of wind, and coastal flooding were among the effects of the “bomb” cyclone Winter Storm Grayson, which ironically shares a name with the most famous superhero sidekick of all time.

Of course, unlike the eminently helpful but fictional Dick Grayson, the unfortunately all too real Winter Storm Grayson kicked many shippers’ supply chains in the U.S. East Coast side. American Shipper reported:

Class I railroad CSX announced the closure of their Charleston and Savannah ramps on Wednesday, with re-openings scheduled for Thursday….

Norfolk Southern closed their ramp in Charleston on Wednesday, with the Ayer, Charleston and Norfolk Intermodal facilities resuming operations on Friday….

Charleston port terminals ceased operations Wednesday and remained closed on Thursday. According to advisories, South Carolina DOT issued truck restrictions on I-526 and I-26….

The Port of Virginia also advised that Norfolk International Terminals (NIT) and Virginia International Gateway (VIG) are tentatively scheduled to reopen on Saturday, Jan. 6. Norfolk Southern said it will continue to accept shipments billed to the Port of Virginia and advance them as conditions allow. However, the railway will not be able to unload and return units once they have been loaded.

Luckily, the timing of Winter Storm Grayson is about as optimal as the timing of a delay causing event can be when it comes to international shipping. Shipping volumes tend to be much lower this time of year. Peak season, leading up to the holidays, is well over, and many business are in a seasonal slow period following the holidays.

As such, major congestion is not expected at East Coast ports despite last week’s closures and slowdowns.

Eyes will definitely be on the weather as the winter continues. After the hurricane season hit Gulf Coast shipping hard and the strength of Winter Storm Grayson being so high, it has almost become an expectation for weather to be more extreme than usual through 2018.

As always, Universal Cargo will be watching how weather and other factors affect the ports and working hard to make sure our shippers’ cargo imports and exports move as smoothly as possible.