Universal Cargo Management received a gift Monday for being part of shipping history. 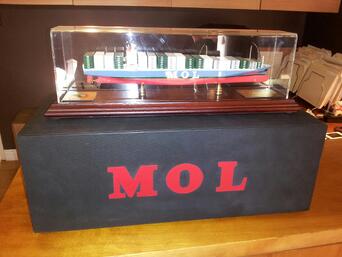 Representatives from Mitsui O.S.K Lines—better known as MOL, one of the biggest shipping companies in the world—stopped by our Los Angeles Corporate Headquarters in Culver City and gave us the model ship pictured on the right.

With more than 800 vessels they operate, MOL ships containerized cargo all over the world; however, there is a particular region from which MOL has not been able to ship containers to the US.

On Christmas Eve, the first 40’ high cube container from Yangon to Norfolk, Virginia was handled by Myanmar MOL Limited with Universal Cargo Management acting as the freight forwarder on the shipment.

Yangon is the former capital Burma (Myanmar). Though no longer the capital, it is still the country’s largest city and holds huge commercial importance.

US sanctions were put into place in July of 2003, stopping Burma from exporting to the US.  President Barack Obama visited Burma in November of 2012 and promised an easing of the sanctions in recognition of the reform efforts made by the government of Myanmar.

The sanctions banning imports from Myanmar to the US were originally enacted because of myriad violations of human rights perpetrated by the military junta, which had seized power in Myanmar.

Offenses included the “use of child soldiers, drug trafficking, human trafficking, money laundering, failure to protect religious freedoms, violations of worker’s rights” and more according to the CRS Report for Congress.[1]

The sanctions prohibited many different activities. The sanctions included “visa bans, restrictions on financial services, prohibitions of Burmese imported goods, a ban on new investments in Burma, and constraints on U.S. assistance to Burma.”[2]

It was changes in Myanmar’s ruling government that moved Obama to visit there during his tour of the Pacific after his re-election.

During his very brief (6 hour!) visit, President Obama addressed the positive changes made by the government of Myanmar in its treatment of its citizens, but also pointed out that further reforms are still needed.  Despite his criticisms, Obama pledged to ease US sanctions against Burma in recognition of the progress already made.[3]

This personal visit was the culmination of a series of diplomatic negotiations.

-In August, Obama addressed Congress and was allowed to waive further sanction provisions, presumably in preparation for his visit to Myanmar.

-In September, Secretary of State Clinton confirmed the easing of US sanctions, especially economic ones (i.e. the ban on imports from Myanmar to the US). She did this at a meeting in New York at the UN with Thein Sein, the leader of Myanmar, again as a pledge of good faith at the reforms instituted under Sein’s leadership.[4]

In a newsletter, MOL cited “the Myanmar government’s ongoing reform efforts that had seen the release of hundreds of political prisoners, the removal of pre-publication censorship requirements for the press, and the enacting of labor laws to permit the formation of labor unions…. efforts to join the Extractive Industries Transparency Initiative…. a cease-fire agreement… with 10 armed ethnic groups…. and steps towards democratization with a parliamentary by-election “ as reasons for the ban to be lifted.

Historically, Myanmar has never been a huge exporter to the US, their trade products to the US restricted to hardwood, gems, and clothing.[5]  But that will likely change now that the sanctions are easing. This first shipment consisting of furniture may presage a broadening of products for export as well as warmer economic relations between the US and Myanmar.

The Myanmar branch of MOL is proud to have made the first Burmese export to the US with the delivery of furniture packed in a 40 ft. high cube container and UCM acting as the freight forwarder. 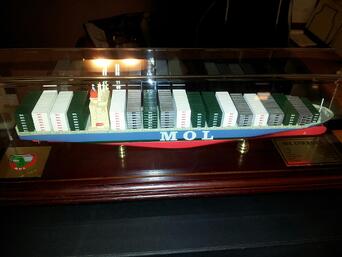 Impressed with UCM’s work, MOL presented Universal Cargo Management with the model of one of their cargo ships, which displayed in our headquarters will remind us of this historic occasion.

The cargo we handled together from Yangon to Norfolk was the very first (of many, hopefully) out of Myanmar bound for US consumers carried and marks the end of an almost 10 year ban on imports to the US from Myanmar.

Yangon is also known as Rangoon, which literally means “end of strife”.

May the region truly see an end of strife. At the very least, this piece of international shipping is a step in that direction.