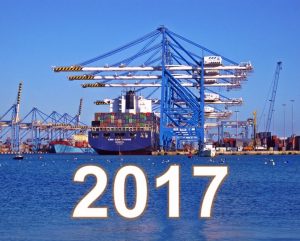 What does 2017 have in store for international shipping?

Here are four predictions for the international shipping industry in 2017:

In 2016, we saw some very low freight rates. The numbers even hit record lows. Don’t expect to see freight rates bottom out like that again this year.

There has been downward pressure on freight rates for several years with overcapacity in the international shipping industry. That overcapacity is not gone, but increased ship scrapping; consolidation through mergers, buyouts, and alliances; and decreased ship ordering should start mitigating overcapacity some.

Some was the keyword in that last sentence.

Freight rates shouldn’t soar out of control as carriers still will be battling overcapacity in 2017. However, these giant shipping companies should have learned a lesson from the freight rate pricing wars that helped create the unsustainably low freight rates of 2016.

The end of 2016 actually saw a surge in freight rates that should make carriers feel a bit more confident about where the numbers stand going into 2017.

Freight rate increases listed in the article include an 11.3% rise from Shanghai to North European ports increased, 24.8% surge in Asia to the US west coast ports, a jump of 18.6% from Asia to the US east coast, a leap of 61% in rates to Santos, a 39% climb in rates to Durban, and an escalation of 23.9% in rates to West Africa.

I wouldn’t expect carriers to be able to maintain those kinds of freight rate increases, but I do expect a moderate increase in 2017. Of course, there is probably no subject in international shipping that shippers are keener to watch.

Even though there should be moderate increase in freight rates across the year, carriers are still likely to struggle in 2017.

Instead, it is more likely a carrier getting close to bankruptcy will get bought out. Maersk has switched to a strategy of acquisition, looking for competing carriers it could acquire. As Maersk does, so do other carriers. Don’t doubt other carriers are also looking for opportunity to buy out a competitor.

Of course, there will be more to see than just buy outs. Expect a major merger or two to make international shipping headlines in 2017 as well.

Carrier alliances also are not going anywhere. The carriers have already pretty well split themselves into three major alliances. Those alliances should continue to solidify in 2017. However, we could see some adjusting of the alliances, especially if there are mergers or buyouts that crossover from one alliance to another.

With the election of Donald Trump as president, there has been fear in the international shipping industry that protectionist policies will hurt importers and exporters.

The fear is that the new administration will institute high tariffs while the controversial new president will hurt international relationships.

What if Trump really puts huge tariffs on imports from China? What if people around the world dislike Trump so much they no longer want to be business partners with U.S. companies?

I don’t believe I’m about to quote Aaron Rodgers, but R-E-L-A-X.

International business will go on. Business relationships are not motivated by how much people around the world like the countries’ presidents of those with whom they do business. Exporters need not worry about losing international customers as demand and potential for profit remain.

Even with tariff increases, international shipping will continue in 2017.

There actually is a shift happening in China that could affect its status as the United States’ top trade partner that doesn’t share a border. But that’s a blog for another time.

No Contract Extension from ILWU

I certainly hope this prediction is wrong.

The International Longshore & Warehouse Union (ILWU) and Pacific Maritime Association (PMA) teased us in 2016 with talks to discuss “the concept” of an early contract extension.

The hope is that these parties will actually reach an agreement to extend the current contract well before it expires in 2019. However, that is not likely to happen in 2017.

The dockworkers unions, both on the West and East Coast, by design do not extend or complete new contract negotiations before the previous contract expires. They want the leverage of their most powerful weapons–slowdowns and threat of strikes.

The problem, of course, is that every time a contract comes to an end, ports experience slowdowns, congestion, shutdowns… Everyone in the supply chain suffers, ports lose reputation, and jobs the unions are supposed to protect actually are put in danger.

Despite that, and the urges from the rest of the industry, I don’t believe 2017 will be the year we see the ILWU break from tradition by signing an early contract extension.