If you regularly read this blog, you probably already know international shipping is vital to the U.S. economy, job creation, and U.S. competitiveness abroad. However, if you regularly read the bills passed by congress and signed by the president, you might think our country’s leaders did not know it.

When budgets are made and bills are passed, funding goes in a lot of different directions. Usually, U.S. maritime is not a big receiver of government funding.

Never has this seemed like a more glaring oversight than during the passage of previous infrastructure bills.

In fact, in 2011 and 2013, I posted Universal Cargo (UC) blogs about Tony Munoz, editor-in-chief of the Maritime Executive Magazine and MarEx e-Newsletter, calling President Obama out on his maritime policy. Or lack of maritime policy. What Munoz wanted to see was funding for U.S. short sea shipping. We’re talking about infrastructure for the nation’s international shipping operations here. But money simply wasn’t going in that direction.

Eventually, that plan got squashed. But that doesn’t mean the U.S. started putting more funding toward short sea shipping and maritime operations in general.

My 2013 UC post mentioned above featured Tony Munoz calling out the president and our country’s leaders again on the issue. Munoz wrote back then:

Unfortunately, the U.S. does not have an effective maritime policy beyond general rulemaking for its EEZ [exclusive economic zone]. Recently, the Department of Transportation was awarded an additional $1.4 billion to its $98.5 billion budget for 2013. The Obama Administration provided an additional $492 billion over five years (2014-2018) for planes, trucks and rail. Unfortunately, when it came to shipping, the Administration gave the Maritime Administration (MARAD) a paltry $433 million for its 2013 budget.

Munoz pointed out the benefits a focus on maritime and short sea shipping in the U.S. could have on the nation’s infrastructure.

He brought up how creating a marine highway with America’s 96,000 miles of coastline and 22,000 miles of inland waterways could reduce gridlock and smog by removing so many trucks from freeways. The Inland Waterways Trust Fund and the Harbor Maintenance Tax Fund were even brought up by Munoz as funding options.

After a while, it seemed like Munoz’s complaints just sounded to Congress and the White House like the whining of Arnold to his know-it-all parents on “Diff’rent Strokes.” The exception being Arnold’s parents would eventually sit down with him and address whatever it was he was talkin’ ’bout.

It seemed destined that every few years I’d post a blog on UC’s site about how the United States’ infrastructure budgets and plans ignore the nation’s extremely important international shipping operations.

Oh, if only you had lived to see it, Gary Coleman.

At the beginning of this month, President Obama signed a 305 billion dollar bipartisan surface transportation bill into law.

I don’t want to wave a banner, jump up and down, and cheer; however, international shipping is finally getting attention (and funding) in an infrastructure bill.

The bill has been called the Fixing America’s Surface Transportation (FAST) Act.

Until now, the country has operated without a coordinated freight strategy or investment program, limiting domestic and global economic competitiveness. The FAST Act addresses this shortcoming by initiating multiple freight programs:

It’s not exactly a bill to launch an organized a nationwide short sea shipping project, but perhaps this step in the right direction will be enough to bring a smile to Tony Munoz’s face.

We’ll have to wait and see what Munoz’s response is, but you don’t have to wait to share yours. What do you think of the FAST Act? Share your opinion in the comments sections below. 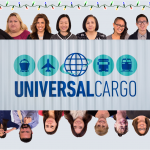