Advice for Trump on Dealing with China

China has changed over the last few years, and the U.S. should consider changing its policy toward China according to an excellent, and somewhat long, article called “China’s Great Leap Backward” by James Fallows that The Atlantic published.

“The China of 2016 is much more controlled and repressive than the China of five years ago, or even 10,” Fallows writes.

Fallows, who has spent much time living in China, sees consistent evidence that the country “is cracking down, closing up, and lashing out in ways different from its course in the previous 30-plus years.”

The areas Fallows points at to indicate a turn away from China growing richer, freer, and easier to deal with are:

What this all adds up to for President-elect Trump? According to Fallows:

The next president, then, will face that great cliché, a challenge that is also an opportunity. The challenge is several years of discouraging developments out of China: internal repression, external truculence, a seeming indifference to the partnership part of the U.S.-China relationship. The opportunity is to set out the terms of a new relationship at the very moment when it is most likely to command China’s attention: at the start of a new administration.

It seems that Fallows was writing this before the election of Donald Trump played out as he gives advice addressing the next administration rather than President-elect Trump’s specific administration; however, if a president was ever likely to do the sort of thing Fallows suggests, that president would be Donald Trump.

Trump repeatedly has criticized the current economic policies of the U.S. when it comes to China along with previous leaders’ abilities to negotiate with China. We got into that in our previous blog about what a Trump presidency means for shippers.

Fallows suggests the new administration change the premises under which the U.S. deals with China, providing specific strategies he expounds on like picking battles carefully and steadily shaping China’s choices.

Fallows even writes a bit of speech President-elect Trump could give once he steps into office:

For 45 years, my predecessors have committed themselves to a partnership that would help China develop economically and resume its place of prominence among nations. We have believed in helping build a better future for China’s people. Our own national life has been enriched by this contact. This is an achievement of which China’s people, and our own, and the world’s can be proud.

But the relationship has been built on assumptions of balance and mutual benefit. We would open ourselves to China’s people and ideas, and China would be open to ours. We would incorporate Chinese firms into our economy, and our firms would have a fair chance within China. The events of recent years have forced us to reconsider whether China’s leaders still view this as a balanced and mutually beneficial relationship. We hope that on their side they, too, are reconsidering their recent actions and will return to the cooperative path. Chinese leaders often quote famous dictums from their literature, and I will cite one of our famous American sayings: We can do this the easy way, or the hard way. The United States would prefer the easier path of cooperation, which has been so beneficial to our two countries. But we are preparing for the hard way.

With President-elect Trump already having talked about big tariff increases on goods from China as a U.S. tactic in the face of Chinese currency manipulation, such a speech from the next president is not hard to imagine.

Shippers who import from China will certainly be carefully watching the United States’ China policy during this time of transition, but so will the whole world. The economies of the U.S. and China are, of course, woven together and strongly affect the economies of the rest of the world.

Trump has said we wants to shift U.S. policies from a focus on the global economy to a focus on the U.S. economy. Shippers may have to do a little shifting with it.

If you get a chance, read James Fallows’s article. It is worth the time. 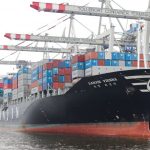