Are Low Freight Rates Bad for Shippers in Long Run? 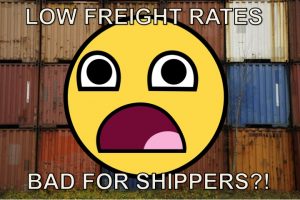 This year has seen record low freight rates. While freight rate pricing has been increasing, shippers are still paying significantly less than in previous years.

There is a long way to go before we can truly call a recovery in spot freight rates. As of 9 June, the year-to-date average of the headhaul WCI rates to Europe and the US are down by as much as 40% compared with full-year 2015 averages. The rate of depreciation is even steeper compared with 2014, which represents the high watermark for spot rates in the last five years,” Drewry [said].

Shippers, of course, are happy to pay less to import and export goods. But should they really be happy to see these prolonged low rates?

Carriers need to see freight rates increase if they expect to be profitable and survive as viable businesses. But have carriers purposely pushed freight rates so low that margins of profitability are hard to reach?

That same Maritime News article mentioned above opened by saying freight rates should be more stable for the rest of 2016, “presuming carriers have ended their rate war”.

While the word “war” has, and rightly so, negative connotations, it sounds positive to shippers in this context. A “rate war” means competition. It means lower prices. That’s what we want to see in business, right? We want healthy competition between the suppliers of a good or service so it can be obtained at fair prices by the consumer rather than a monopoly or oligopoly where one or few suppliers control the industry and can charge whatever they want.

With the onset of bigger ships, especially megaships, now dominating the international shipping industry, capacity has increased beyond demand. Laws of supply and demand dictate that prices should decrease. Freight rates should be lower. But should they be this low? Record low? With struggles to increase them again?

It seems the big international shipping companies, the carriers at the top of the food chain, might have been pushing freight rates down more than supply and demand naturally demanded.

Here’s a little more from that Maritime News article:

Data gleamed from first-quarter 2016 carrier financial reports detail an intense rate war between the major carriers, where every one of them suffered severe freight rate decreases.

Maersk Line was at the forefront of the battle with a 26% drop in revenue per TEU that contributed to a 7% gain in volumes, while other carriers such as APL, Hanjin and K Line weren’t even compensated with larger volumes for their rate discounts.

Maersk, “at the forefront of the battle,” can survive low freight rates that decrease profitability and perhaps even create loss. Maersk is the world’s biggest shipping company and is propped up by an oil side to its business. Many smaller carriers do not have such luxury.

Both of South Korea’s big shipping companies, Hyundai Merchant Marine (HMM) and Hanjin, are at the brink of going under. HMM got bailed out by debt-for-equity swap deals and reduced ship charters, thanks to a little governmental help, but still may be forced into a merger with Hanjin, which hasn’t faired as well so far in getting the help it needs to reach normalization.

The pool (maybe I should say ocean) of carrier competition in the international shipping industry has been shrinking.

This is a time when carriers must work with other carriers in alliances in order to survive.

Of course, at the top of the carrier alliance heap is the 2M vessel sharing agreement between Maersk and the second largest shipping company by capacity, MSC. When seeing those big companies leading a “rate war” that pushes rates way down, shippers may have cause for concern that the biggest carriers are trying to push the competition out.

So while lower freight rates at the moment feel good, they could lead to less competition and higher freight rates later. Freight rates that could be much longer lasting. That would be bad for shippers. And bad for consumers everywhere as 90% of world trade is carried by international shipping industry. 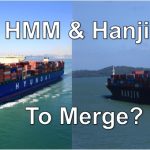