S. Korean Carriers Hanjin & HMM Could Be Forced Into Merger

South Korea might have been taking notes when China pushed for the merger of its two, big, state-owned shipping companies, Cosco Group and China Shipping Group. South Korea may force Hanjin Shipping and Hyundai Merchant Marine (HMM) into a merger.

The government said Monday that it will consider merging ailing Hyundai Merchant Marine (HMM) and Hanjin Shipping should they successfully normalize their management.

“Once the normalization program for the two shipping companies is wrapped up, the government will consider various plans including the merger of the companies,” said Financial Services Commission (FSC) Chairman Yim Jong-yong at a news conference.

As the restructuring programs that the debt-riddled shippers are undergoing will install the state-run Korea Development Bank (KDB) as the controlling stakeholder of the firms, the government can lead the merger of the pair in the future.

Obviously, the resulting carrier of a merger between the two Korean shipping companies won’t be as big as that from the Cosco and China Shipping merger.

The result of the Chinese government-initiated merger was the shipping behemoth China Cosco Shipping Corporation Limited, which immediately shook up the alignment of the carrier alliances in the international shipping industry.

Just because the shipping company resulting from a merger between Hanjin and HMM wouldn’t be as big as China Cosco Shipping does not mean it wouldn’t be significant.

A merger would catapult them into fifth place behind Maersk, MSC, CMA CGM-APL, and COSCO China Shipping, and ahead of Evergreen, and Hapag-Lloyd. Evergreen, however, with 40 ships on order and Hapag-Lloyd which is talking about a merger or some sort of business cooperation with UASC could leapfrog them in the near future.

Becoming the fifth biggest shipping company by capacity in the world, right behind China Cosco Shipping, would not be bad for two shipping companies that have been struggling mightily to just to stay above water.

Creditors of Hanjin Shipping approved a creditor-led restructuring for the shipper in early May, granting a three-month suspension on all payments of principal and interest.

But they conditioned that the shipper should cut charter rates, win approval for debt recast from its bondholders and be included in a global shipping alliance.

“Hanjin Shipping is required to report some progress in its charter rate cut talks by early August,” said an official at one of its creditors. “If it fails in the talks, we have to take a second step.”

Hanjin Shipping has held a first round of talks with 22 owners of its chartered vessels, but failed to receive any positive responses from them.

HMM had a very similar set of requirements put upon it, but has managed them all, with the exception of joining a carrier alliance.

The merging of the companies certainly would make them look more attractive to a carrier alliance, like the new THE Alliance that HMM has been expected to join. 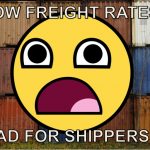