Biden-Backed Port Congestion Plan Not as Successful as Advertised

Parenting 101 from the Ports of Los Angeles & Long Beach

On Tuesday, in yet another blog post about the Ports of Los Angeles and Long Beach postponing the outrageous container dwelling fees they’ve been threatening, I compared the threats to a mom counting down her children before they get in trouble. Only the mom doesn’t really want to punish her children, so she just keeps restarting the countdown.

Of course, such a tactic inevitably becomes ineffective, as appears to be the case at the Ports of Los Angeles and Long Beach.

Children will test their mother and eventually catch on to the fact no punishment is coming. Likewise, as I wrote on Tuesday, no one at this point likely thinks the ports will actually assess these insanely high fees they’ve been threatening. Hundred-dollar-per-day-per-container fees, increasing by one hundred dollars each day, then cumulatively adding together? As President Biden would say – if he wasn’t connected to the plan – “Come on, man!”

While the ports and White House have been touting the effectiveness of the plan, I’ve been skeptical at only hearing a percentage decrease in dwelling containers at the ports with no comparative data. Greg Miller added validation to my skepticism with a data-driven article in American Shipper that shows, as his article title says, the plan has stalled. He put it nicer at one point in the article:

[The plan to threaten fees is] already working a lot less than it used to. American Shipper analyzed all of the available statistics and found that progress in clearing long-dwelling containers has slowed significantly over recent weeks.

Let’s assume for the moment all reduction in long-dwelling containers is completely due to these fee threats. Yes, I’m skeptical of that too. However, I stated already in Universal Cargo’s Thanksgiving-week-post about the fees being postponed again that while correlation doesn’t mean causation, it would be awfully coincidental to say the two aren’t related. That doesn’t mean other factors, like the heavy holiday importing should be over (especially with so many shippers doing that holiday importing early), don’t contribute to reduction of congestion and long-dwelling containers. Still, let’s assume it’s just fee threats contributing to reduced long-dwelling containers. Miller’s article makes it clear the congestion reduction being sold to us as correlating to these threats is not as strong as advertised.

In fact, when he quoted shipping consultant Jon Monroe, you’d think results aren’t happening at all:

“My money says the new port surcharge may never be implemented — as long as we continue to improve the port congestion. And is this happening? NO. But don’t tell anybody. This is best kept a dirty little secret left uncovered.”

Apparently, Miller couldn’t resist telling people, as he got into the data. He also had no problem sharing how easily the data could be spun to look better than it is:

Meanwhile, percentage changes such as the one cited by Seroka are inherently prone to spinning. The White House reports declines measured in twenty-foot equivalent units, whereas the ports publicly report declines in containers, regardless of size. The ports of Long Beach and Los Angeles report their container numbers in two different ways. And any percentage change is heavily skewed by which date range you pick.

The quoted percentage and date range from Seroka is actually how Miller started his article:

“We’re starting to see some traction,” Port of Los Angeles Executive Director Gene Seroka proclaimed on Bloomberg TV on Tuesday. “Those aging containers are down by 50% over the last six weeks.”

When Miller digs into the numbers a bit more than giving that one stat Seroka shares, things don’t look quite so rosy in terms of reducing long-dwelling cargo.

Fuller Picture at the Port of Long Beach

The Port of Long Beach side looks worse than the Port of Los Angeles in terms of the data Miller shared:

Uh oh. That actually looks like numbers are going in the wrong direction. However, there is an overall decrease in long-dwell containers since basically the start of when the fees were supposed to be implemented. But they stopped decreasing. And on a macro level, there are more shipping containers overall at the port than there were when the fees were supposed to begin:

It seems the fee threats aren’t quite the congestion killers they’re telling us they are.

But let’s jump over to the Port of Los Angeles side. I did say things look a little better there from Miller’s data share:

The Port of Los Angeles posts numbers on containers by days dwelling: up to four, five to eight, nine to 12, and 13-plus. Stats are available from Nov. 1. (The Port of Long Beach has these figures as well, but only from Nov. 9.)

The number of containers in Los Angeles dwelling nine days or more is a fair approximation of the number that would be charged excess-dwell fees if those fees were ever charged, but it excludes late rail containers in the six-to-eight-day category.

On Oct. 24, the day before the fee announcement was made, there were 37,410 containers in Los Angeles dwelling nine days or longer. The decline over the past six weeks matches the figure cited by Seroka on Bloomberg.

This is excellent news. Seroka didn’t lie. There’s data to match his statement and more data to show improvement on a macro level. Surely, Seroka didn’t leave anything out, right Miller? Well, there is that whole stalling thing:

Despite the drop in total import containers at Los Angeles terminals, the percentage of containers dwelling nine days or more versus the total was 34% on Wednesday, the same percentage as Nov. 21.

As far as the long-dwelling containers targeted by the fee-threat plan, progress stalled in Los Angeles around Nov. 23. The numbers over the past two weeks have plateaued.

What Do You Expect from the White House?

Meanwhile, the White House is skewing numbers to make things look better than they are at the ports. Miller reports:

The White House puts out twice-monthly releases on supply chain issues, including stats on containers dwelling nine days or more at the ports of Los Angeles and Long Beach. The White House reports the numbers in TEUs, not containers (most of the containers in LA/LB are 40-footers).

7%, 1%, that’s okay. This is still probably the most honest thing this administration has ever said. 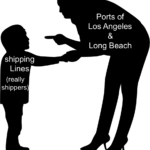