Biden’s Port Envoy Stepping Down After Accomplishing Little to Nothing

The Biden Administration’s port envoy is stepping down reports Peter Tirschwell in the Journal of Commerce (JOC):

John Porcari, the White House’s port envoy, will step down from the role in March, he told JOC.com on Tuesday. Porcari has served as President Joe Biden’s chief liaison to US ports — particularly the country’s largest gateway of Los-Angeles-Long Beach – since August amid historic supply chain congestion that prompted rare intervention by the White House.

Port Congestion Did Not Improve Under Porcari

In a press release, the White House announced Porcari as the Port Envoy to the Biden-Harris Administration Supply Chain Disruptions Task Force on August 27th.

Surprise, surprise, there’s been a lack of improvement when it comes to the supply chain problems the nation has been experiencing, particularly at the Ports of Los Angeles and Long Beach, between Porcari’s appointment and the announcement of his stepping down. Actually, it is a little surprising, as this is the time of year the ports would typically be recovering from particularly busy and congested peak seasons.

However, the port congestion we’ve been seeing is much more than from a particularly busy peak season. Shipping levels at the ports remained strong, generally at near-record to record levels throughout last year, never giving the ports a lull season to recover from the previous peak season.

Still, Porcari’s accomplishments as Port Envoy listed in Tirschwell’s article may be one of the worst accomplishment lists I’ve ever seen in my life:

Porcari is credited by many with bringing focus to the challenge of grappling with the worst container port congestion the country has ever seen, which continues to affect not just Los Angeles-Long Beach, but every major US port. His accomplishments include fashioning threatened fees on ocean carriers for long-dwelling containers and empties at LA-LB. Although neither fee has been implemented, the mere threat is credited with driving down the volume of on-terminal containers that are a root cause of the vessel backlog off Southern California. Inadequate space on terminals to offload containers means ships must remain at berth longer, which forces arriving ships to wait at anchor.

The threatened fees did seem to have some initial impact on reducing the long-dwelling containers at the Ports of Los Angeles; however, the numbers provided to support that were sparse and provided without context and comparison, breeding skepticism. Unfortunately, what initial impact there was stalled out, and the Port of Los Angeles and the Biden Administration spun the stats to exaggerate the effectiveness of the threatened fees. It is probably much closer to the truth than the administration’s brags about getting the ports to operate 24/7, which still isn’t actually the reality. Ultimately, the threatened fees did not help overall congestion at the ports.

Congestion Is Not the Root Cause of Congestion

Part of the reason the threatened fees, even if successful in reducing long-dwelling containers, wouldn’t do much to improve overall congestion at the Ports of Los Angeles and Long Beach is the fact that, without meaning any disrespect to Mr. Tirschwell, long-dwelling containers and empties are not a root cause of congestion at the ports. Long-dwelling and empty containers on the docks are part of the congestion. Congestion isn’t the root cause of congestion, though it certainly does build upon itself. Lack of space on the docks certainly can add to unloading times of ships, potentially making the long queue of ships waiting at anchor in the San Pedro even longer. That’s what Tirschwell is getting at, I’m sure, but even after initial reductions in long-dwelling containers, that queue of ships waiting to dock at the Ports of Los Angeles and Long Beach didn’t get shorter.

In fact, earlier this month, I was forced to write about how congestion at the Ports of Los Angeles and Long Beach have gotten worse instead of better.

If you want to look at root causes of the congestion, you have to look at governmental response to the pandemic. Implementing lockdowns and pumping out trillions of dollars in stimuli pushed demand well beyond what the supply chain could handle. COVID restrictions and vaccine mandates further exasperated the problem, reducing efficiency and negatively impacting the already existent trucker shortage.

Many factors beyond the trucker shortage have been building up through a period of years to make the supply chain unable to handle the governmental response to the pandemic and resultant surge in shipping demand. Those factors include dockworker unions fighting automation at the ports, making U.S. ports less efficient than comparable ports around the world; lack of equipment and shipping containers being where they need to be; and carrier competition shrinking with the emergence of just three alliances dominating all of ocean freight shipping.

That last factor is less obvious to someone outside the international shipping industry, but it’s a big one. Carrier alliances have given shipping lines the ability to control capacity (supply) in the industry. When the pandemic first hit, it was expected shipping lines would lose billions of dollars. So the carrier alliances blanked (cancelled) hundreds of sailings, shrinking supply well below demand, even as demand initially dipped a bit. Additionally, this created a massive problem of maldistribution of shipping containers, and other equipment like chassis, around the world. This helped create a perfect storm when lockdowns and stimuli skyrocketed demand.

Is Helping Lobbyists an Accomplishment?

There is one more piece of Tirschwell’s article that could be looked at as containing accomplishments of Porcari’s:

[Porcari] oversees meetings of the [Biden-Harris Administration Supply Chain Disruptions Task Force] and is in regular contact with key stakeholders at US ports.

His three-times-per-week conference calls on Mondays, Wednesdays, and Fridays, recently scaled back to twice a week, have become well-known forums for dialogue among the diverse group of stakeholders that comprise the US port ecosystem, with dozens participating on each call.

It’s probably a stretch to call holding or overseeing meetings as an accomplishment, but bringing together leaders in the supply chain to brainstorm solutions is certainly a good thing. Unfortunately, Lori Ann LaRocco reported in an American Shipper article that “the weekly calls between White House officials and port participants have turned into lobbying sessions, with some companies having government representatives on instead of CEOs or logistics management.”

Despite the complete lack of success the Biden Administration has had with port congestion and the supply chain, Porcari’s stepping down is not being billed as him taking responsibility or being made the fall guy for failure. Tirschwell reports:

Porcari told JOC.com his departure comes as the port envoy role will shift to a more permanent structure under the new Federal Office of Multimodal Freight Policy, created as part of the $1.2 trillion bipartisan infrastructure bill signed into law in November.

I’m sure when the supply chain does get smoother and the port congestion is cleared, the Biden Administration will proclaim it achieved the victory. In the end, they may be partially right. There’s a good chance it will be inflation decreasing demand that will finally provide the supply chain with relief. 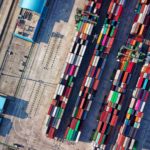