U.S. shippers and truckers are being hit with detention and demurrage fees for reasons beyond their control. Again. Or maybe I should say still.

For those who are unsure or unaware of what these fees are, here’s a quick definition:

Fees terminals charge for not picking up shipping containers of goods from the port beyond the “free time” allotted after being offloaded from a ship. The fee is sometimes referred to as “storage.”

Both of the above fees tend to be cumulative on a daily basis and can quickly become severely expensive.

Back in March, we blogged about shippers being hit with coronavirus-related detention fees when a rash of blank sailings and restricted port hours for COVID-related reasons often made it impossible for shippers and truckers to return empty containers on time. Now, we’re seeing port congestion cause both late pickup and return of shipping containers – but certainly not for a lack of trying on the parts of shippers and truckers.

The very strong peak season 2020 is seeing – extending into November thanks in part to the stocking and restocking of reopening businesses and a massive increase in online shopping on top of shipping to prepare for the holiday season – is combining with COVID-related smaller numbers of dockworkers at ports to create port congestion. Congestion at the Ports of Los Angeles and Long Beach is especially bad right now, but congestion is being seen at ports all along the west coast and at east coast ports as well.

Kim Link-Wills wrote a whole article in American Shipper about how the Port of New York and New Jersey is striving to keep cargo moving during the record-setting volume numbers it’s seeing:

The port set a monthly container record in August with 688,365 twenty-foot equivalent units (TEUs). It then broke that record in September by handling 720,969 TEUs, a 15.4% year-over-year increase.

According to the port, these efforts include keeping marine terminals open on holidays; adding extra hours of operation on nights and weekends; infusing extra chassis into the network; working overtime to keep chassis units roadworthy; and adding empty railcars as well as trains into the intermodal network.

On the west coast, where the Ports of Los Angeles and Long Beach handle more cargo volume than any other ports in the U.S., the struggle to keep cargo moving is not going well, evidence by the opening lines of an article by Ian Putzger in the Loadstar:

The chronic congestion that has plagued the US port complex of Los Angeles and Long Beach since the summer is going from bad to worse.

The main point of the article is how the CTA and HTA are calling for a halt to the detention and demurrage charges that shippers and truckers are being hit with in the middle of this bad congestion:

The CTA and HTA say they will take their case one step further if they don’t see progress soon, intending to call on the US Federal Maritime Commission [FMC] to intervene.

In fact, a year ago the FMC announced it would it would “address detention and demurrage charge issues” by adopting a set of recommendations Commissioner Rebecca Dye made. Commissioner Dye led an 18-month fact finding investigation into these often unfair demurrage and detention fees. Unfortunately, little action has been seen from the FMC on the issue since then. It’s well past time the commission took stronger action to protect truckers and shippers in regard to this issue. 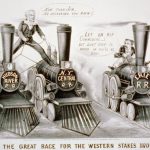