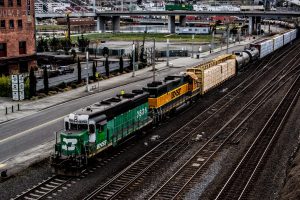 Surcharges aren’t only the tools of ocean freight carriers. Rail companies can slap surcharges on cargo movement too. Indeed, U.S. shippers, right now, are seeing surcharges and gate restrictions from rail companies. Ari Ashe reports in the Journal of Commerce:

Pressure is building on the networks of Western US freight railroads, as reflected by Union Pacific Railroad (UP) assessing a $500 surcharge on certain shipments and BNSF Railway imposing gate restrictions at a Los Angeles terminal due to a surge of volume driven by e-commerce retailers.

In a media release entitled Addressing Intermodal Service Challenges in Southern California that BNSF published this week, the railway company actually calls the surge a “sharp rise in volume” that has happened over the past several weeks.

Aren’t Shipping Volumes Down Not Up?

In a couple blog posts this month about what the 2020 peak season will look like and if we’ve seen the peak of freight rates, I predicted that we will see a peak season with increased cargo volume despite many predicting otherwise. However, this sharp rise in volume BNSF is talking about is not 2020’s peak season rise.

While, in a strong peak season year, we can see international shipping’s peak season start early in July instead of being concentrated only in the months of August and September, that is not what is actually happening at the moment. And don’t let early peak season surcharges from ocean freight carriers make you think otherwise. The increased rail movement of goods is actually driven by e-commerce.

E-commerce has spiked over the last few months because of shelter-in-place or lockdown policies that were put into place because of the COVID-19 pandemic. The cargo moved by train is both domestic and international. Domestic shipping in particular has greatly increased as consumers are either unwilling or unable to go to brick and mortar stores during the pandemic. Anecdotally, I know many people who have done a fair amount of online shopping just to find items to help entertain their kids, who are unable to go out and play with friends like they would normally be able to do.

[Contact Universal Cargo to see how we can help you with your business’s domestic shipping.]

For those of you who prefer data-driven evidence over anecdotal evidence (and who doesn’t?), Ari Ashe shared, in a separate JOC article from the one quoted above, MasterCard research that paints a pretty good picture of how much e-commerce has grown during this pandemic:

According to Mastercard, more money was spent online in April and May than the last 12 Cyber Mondays combined. US e-commerce spending grew 93 percent in May year over year, the credit card company’s research arm said.

Like ocean freight carriers do, rail companies can sometimes have trouble making surcharges stick. However, there’s a good chance we’ll continue to see both surcharges and gate restrictions from the railways over the next several months.

Many factors make consumers more likely to do shopping online that they would have gone to stores for in the past. The reopening of the economy is waffling back and forth. Many restrictions on businesses are being lifted only to be put back in place. Schools in many regions are not opening right away. The mainstream media and Democrats are emphasizing the most negative and fear-inducing sides of the pandemic in order to win the upcoming election.

Additionally, we are now hitting the traditional peak season months of international shipping, and, as I stated earlier, we should still see an increase in the importing and exporting of goods in preparation for the holiday seasons. Then, of course, we’ll see rails experience that seasonal increase in demand for the moving of goods from Black Friday and Cyber Monday through Christmas.

For those of you who are interested, I’ve included the full text of BNSF Railway’s press release about intermodal service challenges in Southern California below.

BNSF operating teams are responding to service challenges affecting some intermodal shipments. Freight shipment demands, as influenced by the COVID-19 pandemic, have been volatile. In the past several weeks, a sharp rise in volume, primarily driven by e-commerce business, created some imbalances in resource availability at key BNSF hubs, including our Los Angeles-Hobart Intermodal Facility.

In response, BNSF has been re-deploying a significant number of locomotives, railcars and personnel to affected locations, particularly in Southern California. Gate allocations were put in place at Hobart to ease congestion and will be reduced as conditions improve at the facility. Off-site parking for both inbound and outbound shipments is being fully utilized, and we have also diverted some freight to alternate facilities in San Bernardino and Barstow with available capacity.

These actions, as they continue being implemented, are expected to provide the necessary capacity to meet demand levels. With similar adjustments made to meet increased freight demands at our Alliance Intermodal Facility in Fort Worth and facilities in the Chicago area, service performance has started to improve. The challenges of keeping pace with this volume surge, however, will require continued flexibility and collaboration.

Please contact your BNSF sales representative or BNSF Customer Support with any questions or concerns. We appreciate your business and will provide additional updates on our progress. 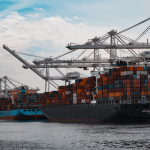 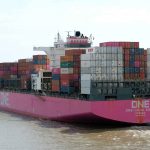