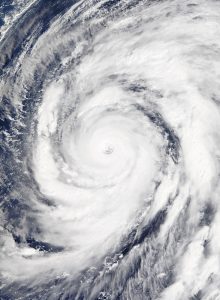 Hagibis means speed in Tagalog — a fitting name for a super typhoon with winds of 160 miles per hour. Unfortunately, those winds are speeding toward one of the world’s most populous cities, Tokyo.

Its winds aren’t expected to be quite that strong when Hagibis makes landfall; however, they’ll still be strong enough to threaten lives, destroy property, and interrupt the supply chain with likely closures of the ports of Tokyo, Kirarazu and Yokohama, according to a Freight Waves article by Nick Austin, Director of Weather Analytics and Senior Meteorologist.

Winds are still expected to be 90 to 100 miles per hour when Hagibis makes landfall.

The damage Hagibis is likely to cause would be on a historic scale according to an article by Karen Zraick in the New York Times:

Jeff Masters, a meteorologist with the magazine Scientific American, said that if Hagibis proceeds as predicted, it could become one of the most damaging typhoons in Japanese history.

“If it hits Tokyo Bay like some of the current forecasts are saying, then it’s going to be a multibillion dollar disaster,” Dr. Masters said.

The most important thing to worry about in an event like this is the lives that are in danger. Then you start thinking about the potential property damage — the loss of homes and businesses. Then there’s the economic impact that affects people’s lives.

Since Universal Cargo’s blog is about international shipping, we share information about Hagibis’s effects on the supply chain. And the potential impact there is significant.

Japan is the 4th biggest trading partner with the U.S. according the United States Census Bureau. With the trade war happening with China, there are even U.S. importers who have diverted their sourcing from China to Japan. Shippers who import from Japan, including those who moved their sourcing to Japan from China because of tariff hikes, will likely see delays if the goods they’re importing are scheduled to go through the major Port of Tokyo (or the ports of Kirarazu or Yokohama) in the upcoming weeks.

There is obviously also risk for those who source their manufacturing directly in Tokyo and its surrounding areas with Hagibis expected to make landfall in Tokyo Bay on Saturday, October 12th.

Not surprisingly, as we approach Saturday, air and rail cancellations have already begun. An Accuweather article by Eric Leister and Maura Kelly reports:

According to the Japan Times, rail operators and airlines have already begun issuing cancellation notices for scheduled departures this weekend.

Japanese broadcaster NHK reported that All Nippon Airways was cancelling all domestic flights on Saturday to and from Haneda and Narita airports in the Tokyo area, while Japan Airlines was cancelling nearly all of its flights.

Flooding from Hagibis will likely cause street and rail closures after the storm strikes. These could add to congestion at the Japanese ports as they’re trying to recover from closure and any damage that may occur.

If you are importing from Japan or exporting to Japan through Universal Cargo, our team will communicate with you about any interruptions, delays, or issues caused by Super Typhoon Hagibis concerning your cargo.