It’s probably not a good idea for a country you’re fighting in a trade war to control one of your biggest ports. That’s a situation that was set to happen because of COSCO Shipping’s deal to buy Orient Overseas International Limited (OOIL) back in 2017 and President Trump starting a battle of escalating tariff hikes with China in 2018.

COSCO shipping is a Chinese state-owned company. Taking over its Hong Kong based rival OOIL means COSCO would take over Long Beach Container Terminal. You can connect those dots with the transitive property.

While the topic didn’t get much press, probably because this is the generally thought of as dull topic of international shipping we’re talking about here, the Trump Administration obviously didn’t like the idea of the Chinese government controlling the operations at one of America’s most important ports. Yes, this could fairly be classified as a national security issue.

Therefore, the U.S. government required OOIL to sell the Long Beach Container Terminal. It took some time for OOIL to find a buyer and the sale to get approval, but things are moving forward with the transaction. Though that isn’t to say the process of regulatory approval is complete.

Back in April, Chester Yung reported in the Wall Street Journal:

Orient Overseas (International) Ltd. said Tuesday that it would sell the Long Beach Container Terminal business in Southern California to a consortium led by Macquarie Infrastructure Partners for $1.78 billion.

The sale by the unit of China-based Cosco Shipping Holdings Co. is being undertaken pursuant to the National Security Agreement entered into by Orient Overseas, fellow Cosco Shipping unit Faulkner Global Holdings Ltd., the U.S. Homeland Security Department and the U.S. Justice Department last July. Under that agreement, Orient Overseas had committed to divest itself of ownership of the Long Beach Container Terminal business.

Foreign investments in such important things to national security and the U.S. economy as ports is a serious thing. However, it is outside the consciousness of most citizens and not something talked about much in the press.

What suddenly seems to have garnered some attention to this story is a Judicial Watch article on the topic. A few people emailed me the article, asking for a blog on the topic.

I am glad the article was sent to me even though Judicial Watch is a bit too politically slanted for my taste (however, what isn’t at this point?), with one section reading:

The article is hyperbolic, but it is not completely wrong either. China is buying up shipping assets and port terminals around the world. Take Europe for example. An article from NPR, which is politically slanted in a very different direction than is Judicial Watch, states:

In the past decade, Chinese companies have acquired stakes in 13 ports in Europe, including in Greece, Spain and, most recently, Belgium, according to a study by the Organization for Economic Cooperation and Development. Those ports handle about 10 percent of Europe’s shipping container capacity.

China’s increased control in ports also increases the country’s influence over other nations. It also gives them strategic advantages should conflict arise.

It should also be noted that on top of gaining operational control in ports around the world, 6 of the world’s 10 busiest ports last year were in China itself, according to South China Morning Post. I doubt China is relinquishing control of those ports to other countries.

There’s a certain global dominance China is striving for in international shipping and global business. The U.S. should be wary of giving China that dominance at the ports.

Jared Vineyard
For more than ten years, Jared has researched and written about the international shipping industry for the freight forwarder Universal Cargo. His work has been republished on the web and in print, including the maritime news magazine Inside Marine. When first joining Universal Cargo, Jared trained in the freight forwarding process and helped customers with their imports and exports, giving him his initial international shipping sea legs.
Showing 4 comments 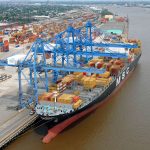