You thought those 25% tariffs on $250 billion worth of products imported from China were high? Well, starting October 1st, they’re going to be increased to 30% according to tweets from President Trump .

Not only is President Trump raising the 25% tariffs on Chinese goods to 30%, the upcoming 10% tariffs on approximately $300 billion worth of Chinese goods, much of which the Trump administration postponed to December 15th, are being increased to 15%.

For many years China (and many other countries) has been taking advantage of the United States on Trade, Intellectual Property Theft, and much more. Our Country has been losing HUNDREDS OF BILLIONS OF DOLLARS a year to China, with no end in sight. Sadly, past Administrations have allowed China to get so far ahead of Fair and Balanced Trade that it has become a great burden to the American Taxpayer. As President, I can no longer allow this to happen! In the spirit of achieving Fair Trade, we must Balance this very unfair Trading Relationship. China should not have put new Tariffs on 75 BILLION DOLLARS of United States product (politically motivated!). Starting on October 1st, the 250 BILLION DOLLARS of goods and products from China, currently being taxed at 25%, will be taxed at 30%. Additionally, the remaining 300 BILLION DOLLARS of goods and products from China, that was being taxed from September 1st at 10%, will now be taxed at 15%. Thank you for your attention to this matter!

As referenced in President Trump’s tweets, these tariff increases were announced in response to China’s latest tariff increase announcement that came earlier the same day. The U.S. Trade Representative also laid out this news in a press release issued on Friday. Here’s its full text:

Many reporters and news outlets spun the news of President Trump postponing tariffs until after the international shipping peak season as the president showing weakness in the trade war with China — a weakness Beijing would take advantage of.

China did follow the announcement of delayed tariffs from the U.S. by announcing a tariff hike of their own; however, Trump responding by raising tariffs by another 5% across about $550 billion worth of Chinese goods shows the administration is not lightening up in the trade war with China.

Earlier in the week, on Monday (August 19th, 2019), Vice President Mike Pence reiterated the administration’s strong stance on China in a speech at the Detroit Economic Club. “We put China on notice that the era of economic surrender is over,” he said. Later in the speech, Vice President Pence added, “By standing strong on our trade imbalance and structural issues with China, we’ll protect American jobs and prosperity for generations to come.”

It is clear that President Trump plans to continue playing hardball with China, not wavering on his stance that the U.S. has been in a very unfair trade partnership with the country and that has to change. But what else is clear?

While the vice president’s speech was clearly part of the campaigning process to reelect President Trump as we move closer to the 2020 election year, there are takeaways to help give us some insight on where we are in the trade war and deal negotiations with China.

In the next blog, we’ll break down things we learned about the trade war and Trump’s outlook on trade deal negotiations with China. 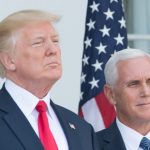