Are Ocean Carriers In Trouble? 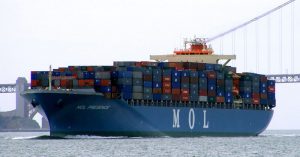 “We’re all going to go bust,” MOL President and CEO Junichiro Ikeda said to the Financial Times about the near future of ocean carriers in the international shipping industry.

For years, we’ve been watching ocean carriers struggle with profitability in the international shipping industry. It’s why we’ve seen carrier competition shrink so much with mergers, buyouts, bankruptcy, and carrier alliances.

Even as competition has shrunk, turning profits remains difficult for the carriers left standing.

In a long American Shipper article about uncertainty for carriers to get on a profitable course, Chris Dupin shared:

BlueWater Reporting estimates that the 11 largest carriers (not including the privately held Mediterranean Shipping Co.) lost nearly $10.6 billion in 2016, about $1.4 billion in 2017 and already $1.3 billion in the first quarter of this year.

Playing a large role in that unprofitable first quarter of this year is rising fuel costs. Carriers have since come under fire for imposing emergency bunker surcharges to try to alleviate their higher fuel costs in an industry that they’re already struggling for profitability in.

There’s good reason for shippers to be upset about those emergency bunker surcharges. The nearly unison announcement of the surcharges screams collusion while the inability to handle the rising fuel costs is the carriers’ own doing.

There is a system in place that should have accounted for the rising fuel prices, but to grab more market share, carriers made contracts with large shippers that completely side-stepped the mechanism that takes fuel price fluctuations into account.

Of course, fuel is not the only cost that carriers have not managed well, but it is a very big one that is only going to get worse. And it is fuel costs that led Ikeda to say that all the carriers are going to go bust.

Just over a week ago, Mike Wackett reported in the Loadstar:

Less than 18 months before the IMO’s 0.5% sulphur cap regulations come into force for merchant shipping, container lines are worried that the estimated $50bn extra cost of the greener fuel could tip them into bankruptcy.

At that point, Wackett brought up Ikeda’s quote from Financial Times that all the carriers are going to go bust. Then Wackett continued:

[Ikeda] expressed his concern that ocean carriers would be unable to recover sufficient amounts from shippers to mitigate the impact of the $300 a tonne extra cost of low-sulphur fuel oil (LSFO).

Mr Ikeda may have good reasons to be worried: carriers have generally not been very successful in their attempts to pass on extra fuel costs to shippers…

Yes, the losses of the first quarter of this year, which have already been brought up above, exemplify carriers’ lack of success in passing on fuel costs. But Wackett also brings up an older example:

In the previous decade, the establishment of SECA (Sulphur Emission Control Areas) in the North and Baltic Seas and North American and Canadian coastlines, which required switching tanks to LSFO when entering, was also not compensated.

Ocean carriers initially announced surcharges to cover the cost of more expensive fuel consumed on some tradelanes, but these were ultimately absorbed into their freight rates.

Carriers need to find a way to compensate for the costs of the upcoming sulphur cap on fuel or risk facing even bigger losses than the billions already suffered in these previous years.

If carriers continue to lose money the way they have in recent history, the shrinking of carrier competition in the international shipping industry will not merely continue, it will greatly increase.

A bit less than a year ago, Maersk (long considered the top dog of ocean carriers) announced expectations that carrier competition would shrink to just three international companies.

It’s not hard to see such an outcome happening to carriers in a couple years, especially with MOL saying they’re all going to go bust when the sulphur cap hits in a little less than a year and a half from now.

In recent years, we’ve watched strategies spread across the international shipping industry’s carriers like a fever as they raced to build megaships and forge ship sharing alliances.

Those strategies certainly have not saved carriers, but they may have helped the carriers stay afloat for a little while like a leaking swim tube ring.

Will “scrubbers” keep carriers from losing too much money to the new sulphur regulations by removing harmful gasses from ship engines and exhausts? According to Wackett’s article, such systems (which act as onboard treatment plants) have been bemoaned by carriers but will now be put on MSC’s ships.

MSC, along with Maersk, is also looking at slowing down its ships on major trade lanes while moving ships over from unprofitable lanes to increase both reliability and profits, according to another Chris Dupin written American Shipper article.

Of course, slow-steaming is no new strategy for reducing fuel costs of cargo ships. Seeing renewed emphasis on it would not be at all surprising at this point. But will it save carriers? Not on its own, it won’t.

Carriers have long shot themselves in the bows as they compete with each other for market share. Price wars have driven freight rates down below profitability margins, negated surcharges, and halted mechanisms built to account for cost fluctuations like bunker fuel spikes. During the last several years, we’ve been watching them take on water.

So, yes, carriers are in trouble. They’re in deep water literally and figuratively. We’ll all be watching and hoping more than Maersk’s prediction of three carriers manage to stay afloat because shippers don’t really want to see a world in which there is no carrier competition.

And let’s just not even think about MOL’s prediction that all ocean carriers are going to sink. 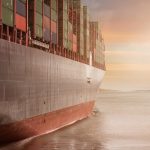