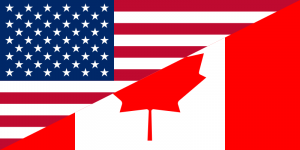 It is a clichéd joke that Canadians are so polite they’ll apologize to you if you insult them. It seems the U.S. tested that cliché’s punchline on a national level.

The U.S. insulted Canada with President Trump’s steel and aluminum tariffs, and Canada isn’t returning insult with apology. Canada is fighting back with retaliatory tariffs. Well, there might be a little of that apologetic sounding politeness to go with the retaliation.

“It is with regret that we take these countermeasures [speaking of Canada’s newly enacted retaliatory tariffs], but the U.S. tariffs leave Canada no choice but to defend our industries, our workers and our communities, and we will remain firm in doing so. The real solution to this unfortunate and unprecedented dispute is for the United States to rescind its tariffs on our steel and aluminum.”

Meyer reported in the article that Canada, on Sunday, put into force tariffs on a list of U.S. products worth $16.6 billion Canadian (U.S. $12.6 billion).

Is it just me or does it seem like it takes serious work to be in conflict with Canada.

As a Detroit Lions fan, I can’t help but be reminded of the slogan “Detroit versus everybody!” In this case, Detroit would be replaced by the U.S.

In both versions of the slogan, it seems the subject of the sentence is in conflict with someone it shouldn’t be. For the Detroit Lions, they not only have to be play against another football team every week but also the NFL refs. For the U.S., it sure feels wrong to be in conflict with our allies.

As Meyer says in his American Shipper article, “Initially, it looked as if both [Canada and the EU] would be exempted [from the new U.S. steel and aluminum tariffs], but Trump dropped the exemptions following unsuccessful negotiations on deals that would likely have replaced those tariffs with quotas.”

Now, I’m no economist, so I’m not going to sit here in my cozy, little computer chair and say President Trump is making the wrong moves. He has his strategy. Even if the whole world says it’s wrong, we’ll all have to wait and see how it all plays out. After all, it seems just about everyone was wrong about Trump’s strategy in running for president being sure to fail.

What we do know is, in the meantime, many U.S. importers and exporters are being affected by tariffs implemented by the U.S. and its trading partners around the world.

President Trump obviously believes tariffs can help level trade playing fields that he thinks are stacked against the U.S. And he’s certainly not wrong that the U.S. could have better trade deals with other nations around the world. With Trump’s belief in mind, levying tariffs makes sense. But tariffs against Canada?

Canada’s government points out that the U.S. has a rare thing (for the U.S.) when it comes to the U.S.’s major metal trade with its neighbor to the north: a surplus.

“The U.S. has a $2 billion annual trade surplus on iron and steel products with Canada,” it added. “Canada buys more American steel than any other country in the world, accounting for 50 percent of U.S. exports. Canadian steel is used in American tanks, and Canadian aluminum in American planes. Indeed, Canada is recognized in U.S. law as part of the U.S. National Technology and Industrial Base related to National Defense.”

As a matter of fact, the U.S. has traditionally held an overall trade surplus with Canada. A peripheral look at the import and export numbers between Canada and the U.S. suggest this is still the case. However, a deeper look shows that this U.S. surplus is due to a surplus in services, and there is actually U.S. deficit in goods trade with Canada.

That deficit on the trade of actual goods with Canada is what President Trump is likely looking to change with a new trade deal with the country. And, of course, he’s trying to use tariffs as leverage to induce Canada into a deal that’s more beneficial for the U.S.