Despite the reshuffling of ocean carriers into just three alliances–the 2M, Ocean Alliance, and THE Alliance–being described as a disaster, U.S. shippers have seen little impact on their imports and exports. But could that change?

As the April 1st reshuffle date approached, shippers were worried their supply chains could suffer significant disruptions. Those fears were not unfounded, as congestion and stranded containers have resulted.

In fact, we told you in a blog last week about Shanghai’s Yangshen Port suffering major congestion largely due to the carrier alliance reshuffle.

However, the trans-Atlantic shipping routes remain, true to their normal character, stable.

While U.S. shippers have only suffered a few delays here and there, the Alliance reshuffle “disaster” has brought chaos to Asia-Europe tradelanes according to an article by Mike Wackett in The Loadstar:

“Organised chaos” – that’s how one carrier describes the Asia-Europe schedules of the Ocean and THE alliances, believing there’s very little hope of vessels hitting itineraries before June.

The source, an alliance member, told The Loadstar the transition of ships and containers from previous schedules to their new alliance hubs had proved more complex than expected – the result being containers stranded at terminals between Asia, the Middle East and Europe.

He admitted that phasing-in and -out had been “a disaster”, resulting in big gaps appearing in network coverage.

In the middle of the chaos of the carrier reshuffle, shippers got a scare that a repeat of Hanjin Shipping’s disastrous collapse might be happening with another carrier. Last week, Yang Ming’s shares were suspended from the Taiwan Stock Exchange. Some shippers took that as an alarm ringing.

The last thing shippers want to see right now is another major shipping line bankruptcy from a carrier in one of the three major alliances, the THE Alliance in Yang Ming’s case. According to another article by Wackett in The Loadstar, the carrier “issued an update on its financial status to mitigate shipper and service provider concerns after the suspension of its shares…”

It’s easy to see why shippers worry about the THE member when the carrier has made headlines recently like “Yang Ming losses double in 2016” in the Journal of Commerce.

In truth, carriers have struggled financially across the board in the international shipping industry for years now, and shippers’ concerns that another major shipping company could collapse are fair. The carrier alliances have created strategies to protect themselves against a member going bankrupt, but it is hard to imagine such an event wouldn’t be negatively impactful for shippers.

Even without a carrier collapse, U.S. shippers have to wonder if negative effects seen so far from the recent revamp of the carrier alliances will reach them.

Hugh R. Morley writes in the Journal of Commerce that “the impact [of the alliance reshuffle] is only slowly emerging on routes across the globe, and it’s unclear how it will shake out and which ports and routes will see more volume and which less.”

Morley even adds that this is also true of the normally stable trans-Atlantic lanes.

Capacity changes that the alliances ultimately put into effect will also impact their ability to increase freight rates. Downward pressure and even record low freight rates caused by overcapacity in recent years have played large roles in carriers’ financial struggles.

Whether or not these alliances will be able to get overcapacity under control is another question hanging in the air from these recent changes.

Here at Universal Cargo, we’ll, of course, be keeping an eye on how the changes in the carrier alliances affect international shipping around the world. As always, we’ll share important updates with you through this blog. 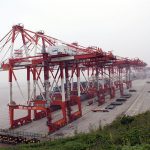