It’s actually happening. The International Longshore & Warehouse Union (ILWU) is extending its contract before the current one expires. This might be one of the most exciting news items we’ve ever shared on the Universal Cargo blog.

It isn’t actually official yet, but Alexander Whiteman reported in The Loadstar that the rank and file vote to extend the contract between the union of dockworkers and their employers at West Coast ports is projected to pass:

US west coast ports received a welcome boost on Friday with early projections indicating that port workers had approved an extension to their collective bargaining agreement (CBA).

The International Longshore and Warehouse Union (ILWU) said reporting from local unions suggested the CBA extension with the Pacific Maritime Association (PMA) would pass by 67%.

Now, we don’t exactly like to call votes early (remember that whole election thing between Hilary Clinton and Donald Trump?), but it’s time to get excited.

Actually, we were already starting to get excited back at the beginning of May when our longshoremen friend David Griffen indicated his belief that the vote would approve the contract extension before ballots even went out. 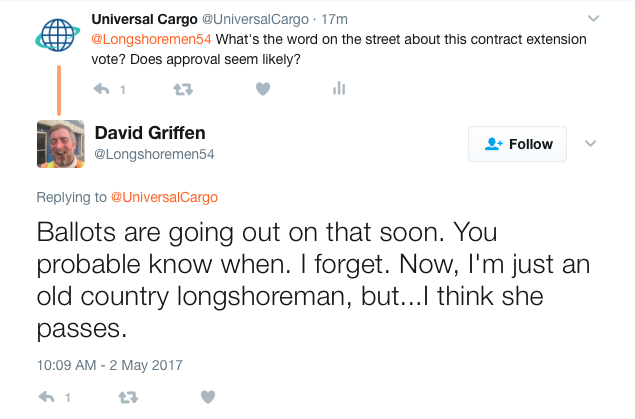 That was shortly after the news broke that the extension was going out to the rank and file to be voted on. Before his response, I had a little trouble believing the ILWU would actually break from tradition and extend its contract early.

Mr. Griffen always seems to be up on the latest news at the docks, dropping Universal Cargo a quick tweet on Friday, the very day the projection of the vote passing was made, to remind us that his prediction was correct. 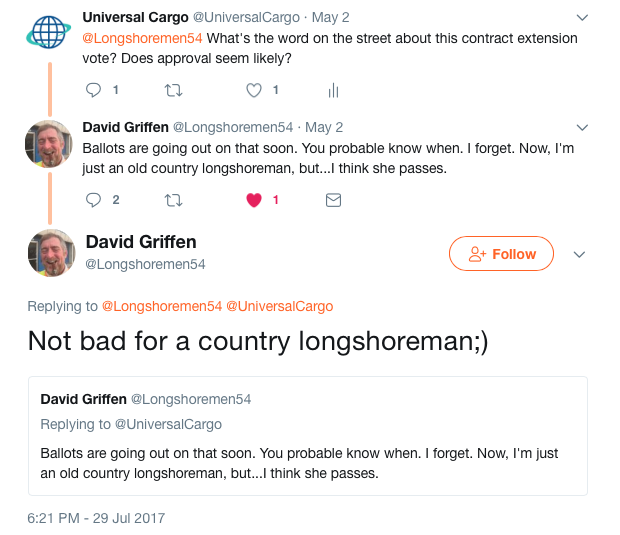 “Not bad for a country longshoreman,” Griffen says. No, not bad. Not bad at all. Thanks for having your finger on the pulse, David.

This isn’t just not bad, it’s great news for West Coast ports, shippers, and everyone, really, involved in the supply chain of international shipping.

In the past when contract negotiations between the ILWU and PMA rolled around, costly disruptions often happened to the supply chain. Strikes, slowdowns, and lockouts at the ports would threaten shippers’ ability to import and export goods in a timely manner.

During the last set of negotiations, congestion got so bad at West Coast ports that agricultural exports rotted on the docks, goods never made it to store shelves for the holiday shopping season, and U.S. businesses lost foreign trade partners.

Because the unions’ top weapons for gaining leverage in negotiations are strikes, threat of strikes, and slowdowns, the dockworker unions, including the ILWU and International Longshoremen’s Association (ILA) on the East and Gulf coasts, traditionally have a policy of neither extending contracts nor completing negotiations on new contracts before the expiration of current contracts.

It was actually the ILA that gave shippers a glimmer of hope that this tradition, which is so harmful to the U.S. economy, might change. Back in 2015, when the huge financial losses from the terrible West Coast port congestion during the contentious contract negotiations between the ILWU and PMA were fresh on shippers’ minds, the ILA and United States Maritime Alliance (USMX) announced plans to open early discussions on a new, long-term contract. That was three years before the expiration of the current one.

Unfortunately, that may have just been talk to get shippers to continue to divert cargo from West Coast ports to East Coast ports as substantial talks on a new contract have not taken place, and we’re now just about a year away from the current contract expiring at the East and Gulf Coast ports.

I was skeptical about the ILA and USMX actually negotiating a new contract early back then, finishing the blog post about it with:

I’d like to think this is a genuine act on the parts of the USMX and ILA to change the negotiating process that is so damaging to shippers and reach a long-term contract before the current one expires. Of course, I also wanted to believe the ILWU and PMA’s pledge to keep cargo moving during their contract negotiations.

Actions will speak louder than words.

Perhaps the actions of the ILWU to extend its contract early will set an example for its sister union on the other side of the country to follow suit. Contract actions (or lack thereof) on both sides of the country are certainly speaking loudly to shippers.

The extension will take the ILWU contract through July, 2022. Official results of the vote will be released Friday, August 4th. 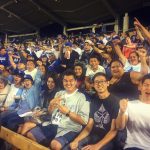 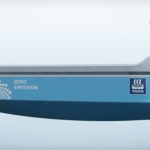