I’ve seen a lot of headlines this year about various ocean freight carriers losing money. However, it all came to a head for me with Mike Wackett’s article in the Loadstar last week with the headline, “2018 may be a write-off as shocking H1 numbers all but sink the liner industry.”

Here’s a highlight from the article:

Just halfway through the Q2 reporting period, some $650m of red ink has been reported by ocean carriers to add to their $1.2bn deficit for the first three months of the year.

To date, niche operator Wan Hai is the only container line to post a net profit for Q2, some $9m, as other carriers face up to the negative revenue consequences of their market share grab and inability to compensate for fuel price hikes.

Wackett’s headline calls the carriers’ first half of the year numbers shocking, but are they really?

I started writing these blogs for Universal Cargo back in 2011. Perhaps the biggest topic I blogged about that year was overcapacity pushing freight rates down, causing carriers to struggle with profitability.

Carriers would go on to suffer losses measured in the billions of dollars in 2011. 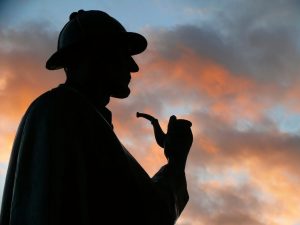 Overcapacity has continued to plague carriers in the international shipping industry to this day. Solving the mystery of the source of struggles for carriers over recent years doesn’t take the genius intellect of Sherlock Holmes. What’s surprising is not that carriers posted such large losses here in H1 2018 but that carriers still haven’t learned to manage capacity, which is at the core of their struggles.

Brazenly increasing capacity as carriers not only makes large losses by carriers unsurprising but predictable.

Despite the concept being quintessential, it’s as if carriers can’t wrap their minds around it. Seven years later and carriers still can’t figure out how to solve their overcapacity problem that causes billions of dollars in losses. In fact, they keep exacerbating the problem.

For example, consider last week’s Journal of Commerce (JOC) article by Bruce Barnard with the headline, “Evergreen swings to loss, but will still boost fleet.”

Evergreen is not alone. Carriers just keep on increasing their capacity in the face of struggles to be profitable in an industry fraught with overcapacity. In fact, the Loadstar article about 2018 H1’s “shocking” numbers all but sinking the liner industry highlights carriers increasing capacity as—surprise, surprise—the source of the problem:

But, according to Alphaliner, the root cause of the industry’s plight can be traced back to the second half of last year, with a rampant expansion of tonnage.

“The active fleet grew by 9% in the fourth quarter of 2017, and it swelled by another 10.7% in the first quarter of this year,” said the consultant, adding that this significantly above-demand growth continued into the second quarter, when supply jumped another 8.2%.

How can carriers keep increasing capacity beyond any demand justifications? Can carriers really be this bad at business? Of course, freight rates are not going to be at healthy and profitable levels for carriers with their current practices.

Meanwhile, there’s a chorus from the carriers blaming poor profitability and losses in 2018 not only on lower than ideal freight rates but also on rising oil bunker prices. Yes, oil bunker prices add volatility to the industry, but come on, did anyone not expect oil prices to rebound after the most recent oil price crash? Yet here carriers act as if increasing oil prices are completely out of the blue and as if increasing capacity isn’t destroying their ability to control freight rates.

Of course carriers understand the importance of capacity when it comes to freight rates. In fact, as we proceed through the peak season of international shipping, when demand is higher because shippers are stocking up stores for the holiday seasons, carriers are actually laying up ships and cancelling services to decrease capacity and keep freight rates strong before the industry hits a slack season.

A couple weeks ago we blogged about what’s happening with with freight rates right now. The gist is that carriers are gaining momentum here during the peak season and are expected to maintain healthy rates through it.

However, carriers cannot maintain healthy freight rates with their current practices. And perhaps that’s by design.

I spoke about those early blogs I wrote in 2011 about overcapacity driving down freight rates, which ultimately has caused billions of dollars in losses for carriers. The major carrier Hanjin even completely collapsed. Well, in 2011, one of those blogs was about Maersk outlasting the competition in the face of low freight rates. Perhaps these market share grabs with increases in capacity are designed by the biggest carriers to crash the freight rate market and make other carriers disappear from the landscape—er, waterscape?—like what happened to Hanjin.

Perhaps carriers’ actions shouldn’t make us contrast them with Sherlock Holmes on the basis of their intellect. Perhaps the top carriers are more like Professor James Moriarty, deep into a long-term plot.

I don’t really want to call carriers villains, but perhaps Maersk and others at the top of the shipping line industry are playing the long game. And using sacrifices to win. Eventually, with less competition, the few carriers left standing will level out capacity and freight rates will see serious increase.