Evolution of Logistics in the Last Hundred Years

When considering logistics, we usually tend to think of the bright future. The development of AI and the full automation of supply chains seem like soon-to-be realized concepts that will make shipping easier, faster, and safer. But, it is helpful to take a step back and consider how logistics has changed throughout history. So, we will use this article to explore the evolution of logistics in the last hundred years and grow a little more appreciative of what we now have.

A Brief Evolution of Logistics in the Last Hundred Years

To fully understand the history of logistics, you need to keep in mind that it is closely related to human development. Since ancient Rome’s trade with Egypt and the grain shipping, all throughout Genghis Khan and the Silk Road, shipping has been a major factor in how nations developed. Where logistics was well handled, people prospered, armies advanced, and cultures developed. Therefore, when considering the history of logistics, it is only reasonable to consider its impact on world events and wonder how different they would be if their logistical technologies were more advanced.

We start off our history in the 1920s. The years of great promise and great change. It is important to understand that the diesel engines were only introduced in the mid-1920s and that compared to what’s to come, logistics was still fairly rudimentary. The most notable advancements came in 1925, when companies started using pallets for storage. By using pallets, companies could store goods vertically and make much better use of the available storage space. And while these advancements were quite important, they were only the prelude to the years ahead.

As it is with most technological advancements, military needs tend to outshine all other incentives. Therefore, it shouldn’t come as much of a surprise that the Second World War brought considerable advancements to logistics.

Once the war started, it soon became important to maintain the supply lines for the military. There was a high demand for both personnel transport and goods shipping as fronts started developing all over the world. Airdrops, train shipping, and freight shipping were all necessary to maintain various armies.

By a similar token, it became more important to increase storage safety and storage capacity. Ammunition was particularly difficult to ship, as it was heavy, dangerous, and fragile. This led to innovations in storage containers, packing supplies and defined the process of safe loading, unloading, and consolidation. Most of what we use today in logistics is based heavily on principles developed in WWII. Even today, you can learn new things by reading how various countries faced logistics problems and how crafty they had to be to overcome them.

During the 1960s, we saw a significant increase in trucking. The increase in safety, as well as standardization of materials, made logistics far easier and predictable. This allowed shipping companies to transport time-sensitive materials and make drop-offs in a much more reliable manner.

But, what truly helped shape modern logistics was the IBM advancements in computer technology. Before, all the logistics data was written and shared on paper. But, IBM brought computerization to logistics data. As you can imagine, this had a tremendous effect, as it showed a glimpse of what the future of logistics will be like.

In 1975, we saw the first real-time management system for warehouses. Through it, logistics managers could track orders, monitor inventory, and oversee distribution. This, again, is a thing that we take for granted nowadays but was a huge advancement in its time. The 1970s also brought us barcodes, which made packet identification much easier.

The 1980s were a period in logistics where everything came into place. While there were no “new things” to make note of, what was already present was made exponentially better. Computer technology, tracking capabilities, logistics integration, communication technology, shipping technology… All of these became incrementally better and better. During the 1980s, companies introduced ERP systems, furthermore helping overall logistics.

So far, logistics was usually handled by third-party companies. But, as technology advanced, it became easier and easier to make logistics an integral part of your company. We asked the moving crew at simplemoving.us, who told us they, like many relocation businesses, cover their own logistics needs. These internal logistics became widespread in the 1990s, as more and more companies introduced their logistics teams.

We can safely say that the story of logistics between 2000 and the present day is known as modern logistics. All the systems we have today were conceived in the early stages of the 21st century. Of course, in their conception, these systems were far more rudimentary than what we use today. Nevertheless, they were conceived during this period.

With the advancement of AI and machine learning, there is no telling what the future will be like for logistics. Even with this quick view of the evolution of logistics in the last hundred years, you can easily see how far we’ve come since the 1920s. So, it is safe to assume that the next 100 years have some surprises in store. Space shipping, fully automated vessels*, interplanetary transport – all of these sound like science fiction now, but, in the 1920s, so did the idea of computers in logistics.

*[Note from editor: It’s not all science fiction: automated container ships have already been created and are being developed as well as automated trucks and port automation, though dockworker unions in the U.S. fight against port automation here.]

Gregory Steele works as a full-time warehouse manager and a part-time writer for various publications. His fields of interest include logistics and sustainability, as he strives to incorporate as many eco-friendly practices into his warehouse as possible. In his free time, Gregory likes to go hiking and play racquetball with his friends. 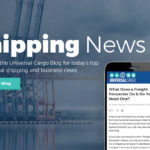