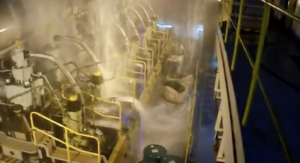 Ocean carriers’ biggest answer to meeting the International Maritime Organization’s (IMO) upcoming 0.5% sulfur cap on fuel (IMO 2020) might not be the answer after all. Or better stated, it might be a dangerous answer.

The IMO 2020 solution we’re talking about here are systems acting as onboard treatment plants to remove harmful gasses from ship engines and exhausts called “scrubbers.”

The fires have been happening with the installation and retrofitting of scrubbers to ships.

Gard has seen a few fire incidents where sparks from welding, metal cutting, and other hot work activities fell into the inner chamber of the scrubber through uncovered openings, and in one case the fire also spread to the engine room through glass reinforced epoxy (GRE) piping. Heat generated from the steel cutting for the supporting brackets, also contributed to the build up of heat inside the scrubber.

Obviously, such fires are dangerous to the people working at the ship yards and are costly. However, such fires are no peculiar to scrubbers, according to Mahajan. Fire is a danger anywhere on a ship where welding, cutting, or grinding work is happening.

Hopefully, more careful procedures like covering and double checking openings on scrubbers will be adapted to help avoid such fires in the future.

Corrosion appears to be a bigger problem with scrubbers that, according to the Gard article, will be installed on nearly 3,000 ships by 2020.

Within a year, corrosion could present serious danger to the crew and cargo on containerships with scrubbers.

Check out what Mahajan wrote about corrosion cases involving scrubbers:

Scrubber waste is corrosive, and we have seen a few incidents where within 10-15 months of the open loop scrubber being installed, corrosion of overboard distance piece or in its immediate vicinity has resulted in water ingress into areas such as the engine room, ballast tanks and cargo holds. Absence of or poor application of protective coatings on the inside of the pipe and at the welds, along with poor application of paint on hull plating near the washwater discharge were identified as the causes of accelerated corrosion. In all these cases, temporary repairs to plug the leak were carried out by divers followed by permanent repairs at a yard.

Workmanship plays a big role in these corrosion cases, but obviously so does the very nature of scrubbers themselves in creating corrosive waste.

With a rush to get scrubbers on ships ahead of IMO 2020 that goes into effect in just a couple months, it’s scary to think we could see a bunch of water leaks in ships about a year from now.

Check out this scary video that was tweeted about a month and a half ago of water pouring down onto the main engine of a ship. The extremely dangerous situation is attributed to a corrosion related scrubber malfunction.

This last scrubber related damage to a ship brings up a few issues.

Here’s the case as Mahajan describes it:

A vessel was regularly trading in Northern Europe and had installed an open loop scrubber. It had to changeover to low sulphur fuel when visiting a port that had regulations in place banning discharge of washwater from open loop scrubbers. It was still required to run the scrubber in dry mode, i.e. with washwater supply pumps turned off, to allow for the passage of hot exhaust gasses with a temperature of nearly 400° C. After departure from port, washwater pumps would be started and cold sea water sprayed through the nozzles inside the scrubber. During inspection of the scrubber by crew, damage was noticed to the nozzles, demister housing and the drains.

A survey was carried out and indicated a variety of concurrent causes, such as thermal shock, poor workmanship by the yard, for example, only spot welding done on demister supporting plates; and poor design. The scrubber had been in service for nearly two years.

Let me start at the end. The scrubber was in use for two years before it was discovered it had both design flaws and shoddy workmanship done on it.

The ocean freight industry is being flooded by scrubbers — no pun intended. With so many being rushed out onto ships to meet the need of complying with IMO 2020, the possibilities for design flaws and workers at ship yards cutting corners with tactics like spot welding are immense.

Many potentially dangerous problems could be building up in and around scrubbers that ships’ owners, captains, and crews have no idea about. Ultimately, these issues could be putting not only ships and cargo but also seamen’s lives at risk.

While the water pollution created by scrubbers may be much less than air pollution, if scrubbers cause ship malfunctions or floodings from corrosion or other problems caused by design flaws or shoddy workmanship, that could lead to bigger pollution events like oil spills from sunken ships.

That Gard is spotting these problems now and giving strategies to reduce the risk of more cases like the ones Mahajan highlights in the Gard article is good. But at the same time, the article is eye-opening. There seems to be a great deal of risk with all the scrubbers hitting the seas.

Still, the industry has put too many eggs in the scrubbers basket for thousands of them hitting the waters to be anything but inevitable now.

All ships using more expensive, cleaner fuels that make scrubbers unnecessary is not feasible as IMO 2020 hits on January 1st. Other options like electric and sail powered ships certainly are not ready to take over the world’s cargo vessel fleet. Going back to wind power is an idea with little traction. But electric ships are stirring much excitement. With that excitement, their potential, and electric ships being tested on the waters, their day will probably come; however, that’s not likely to happen for at least a couple more decades — at least not in a dominant way.

In the meantime, we seem stuck with scrubbers and all their potential dangers. Hopefully, scrubbers will only a short-term fix for the problem of compliance with IMO 2020. If better solutions aren’t moved toward quickly, there could be some serious problems in a year or two.